Deathblow (ひっさつ or 必殺, Hissatsu?), also called Deadly, D.blow, Finisher, Smashing Blow, and Death Strike, is a recurring ability in the series. Deathblow boosts the damage a character deals, and in some games has a chance to inflict Instant Death on the target.

Deadly is exclusive to Yang, available in the Advance and Final Fantasy IV: The Complete Collection versions. Deadly has a Charge Time of 8. When equipped with the Martial Armlet, his Focus ability is replaced with Deadly.

Deadly is a stronger version of Focus, dealing triple damage after a turn skipped to charge up power. This command is most effective against Flan, even though it is not a targeted weakness, but a complementary command to Kick.

Powerful strike that whenever hits an enemy, attacks its weakpoint for massive damage.

Finisher is an ability learned from the Gladiator class, exclusive to the Advance and mobile/PC remakes, and requires 70 ABP to master. It allows the user to strike a powerful attack on a enemy's weak point for massive damage.

The Finisher command can do one of three things:

The ratio between failure, elemental attack and critical hit varies by job level, which is shown as follows:

The element used depends on the character's crystal element. Bartz's elemental attack is Wind, Lenna's is Water, Faris's is Fire and Krile's is Earth. Galuf is given the innate element of Earth, and therefore his Finisher ability will take this element, although the player cannot see this unless they hack the game so Galuf can use this job.

Elemental Attack! will inflict 9,999 damage unless the enemy is immune to or absorbs the element, in the latter case the enemy will get healed for 9,999 instead. A non-boss enemy weak to the character's element dies instantly if the Elemental Attack! lands. In spite of a slash "animation", Krile and Galuf's Elemental Attack will miss flying foes, making their version of this ability less useful than the others'.

Deathblow is a Command Materia found at the Gongaga Reactor. It raises Luck by 1, and gives the user access to the Deathblow ability. The accuracy of Deathblow is 1/3 that of a normal attack, but if it connects the attack will always deal critical damage. It deals the same damage from back row as from the front row.

Players can greatly increase the chances of delivering a critical hit every time by giving the Deathblow Materia to Vincent when equipped with the Sniper CR or Long Barrel R, as both these weapons have 255 accuracy. Tifa's God's Hand also benefits from this attribute. The attack also always connects if the enemy is sleeping/stopped/paralyzed.

Death Blow is one of the attacks available to Squall when wrestling control over a glider from a Galbadian Soldier. It is not always available but when used it will instantly defeat the soldier.

Death Strike is an enemy ability used by Yiazmat, which inflicts Instant Death with a 100% accuracy to one target within a range of 20, a CT of 0, and a Knockback of 30.

Deathblow is a Teamwork ability learned from the Ascension Grid for 16 AP. It has Gladiolus, Ignis and Prompto perform powerful attacks against enemies in vulnerable status (i.e. knocked down). Its damage is boosted by learning Ultimate Deathblow for 99 AP.

Ignis's Overwhelm Technique, which depletes the tech bar by two, has the whole party perform Deathblow attacks against one opponent.

Smashing Blow is a Ranger that deals a critical attack to an enemy. It has a 25% chance of inflicting Instant Death an enemy.

Deathblow is an ability used by Cloud and Zack. This combo is triggered by using the Jump and Special button.

Barret using Deathblow with a Gun-Arm in Final Fantasy VII.

Barret using Deathblow without a Gun-Arm in Final Fantasy VII. 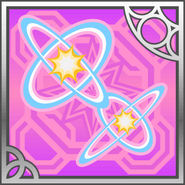 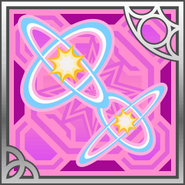 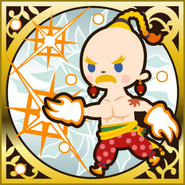 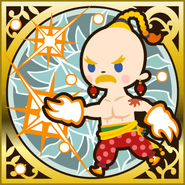 [view · edit · purge]Deathblow is another name for coup de grâce.