Axe that sometimes finishes enemies in one blow. Can be used two-handed.

The Death Sickle (デスシックル, Desu Shikkuru?) is a recurring axe or scythe in the series. It is usually a moderately powerful axe with the additional effect of inflicting Instant Death when it hits its target.

Death Sickle is a low to mid-ranked axe that provides 40 Attack, 43 Accuracy, and has a 33% chance of inflicting Instant Death to a target that is not immune to Death. It works on Heavy targets, but restores the undead to full health. Death Sickle can be used by the Berserker, Freelancer, and Gladiator classes, or a character equipped with the Equip Axe ability. It can drop from the Harvester or Berserker, or be stolen from Mykale.

The Death Sickle is the base form of the scythe Mythic Weapon Liberator, and may be equipped by Dark Knights at level 75. It has a damage of 90 and a delay of 528. It can be upgraded to the Liberator through the Mythic Weapon questline, and it may also be used in the quest "Unlocking a Myth" to teach Dark Knights the weapon skill Insurgency. It can drop from any Notorious Monster fought in Nyzul Isle, and is guaranteed to drop from the Notorious Monster fought on floor 100 of Nyzul Isle if the person initiating the mission is a Dark Knight.

The Death Sickle is the signature artifact weapon for Reapers in Final Fantasy XIV Endwalker, equippable at Level 89 and can be purchased for free in Old Sharlayan during the Main Scenario Quest "A Bold Decision". Its attributes and item level are synced until the player completes the Melee Role Quest. 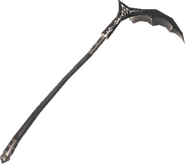 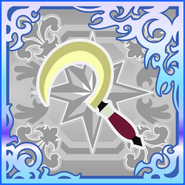 The name refers to a weapon wielded by a Grim Reaper. [view · edit · purge]The concept of death as a sentient entity has existed in many societies since the beginning of history. In English, Death is often given the name Grim Reaper and, from the 15th century onwards, came to be shown as a skeletal figure carrying a large scythe and clothed in a black cloak with a hood. In Japanese culture, the equivalent of the Grim Reaper is often the Shinigami, literally meaning "Death God".