Edit
watch 02:10
How to Obtain Vincent's Death Penalty in "Final Fantasy 7"
Do you like this video?
Play Sound

A rifle from another world wielding astonishing power. Said to have been used by a man who gained the ability to transform into a horrific monster due to human experimentation. While it no longer gains power with each enemy defeated, the rifle still possesses an otherworldly strength.

The Death Penalty (デスペナルティ, Desu Penaruti?) is a recurring gun in the Final Fantasy series. It is usually one of the strongest guns available.

Death Penalty is based on the Colt M1855 revolving rifle, and is Vincent's ultimate weapon obtained in Lucrecia's Cave. The cave can be accessed either by a submarine or a colored chocobo. Vincent must be in the party to witness a cutscene, after which the player must fight between 2 to 11 random encounters and return to the cave, where Vincent finds the Death Penalty along with his LEVEL 4 Limit Break. Death Penalty's power is boosted after every enemy Vincent kills. Due to a damage overflow glitch, if enough enemies are killed, the Death Penalty can kill almost any enemy with a single hit, including Emerald Weapon (but not Ruby Weapon due to its high defense stat).

This is then modified by the attack's power; for normal attacks, the multiplier is 1.0. Unlike most other damage modifiers, each character's ultimate weapon applies the damage modifier after all other modifiers, instead of modifying the attack strength of the weapon itself.

For a plot graph of this formula see here.

To reach a base 1.0 damage multiplier, Vincent would need 768 kills. This can be difficult to do unless Vincent joins as early as possible and he lands most of the party's death blows. This would likely prevent unlocking Limit Breaks on other characters. For comparison, every character's ultimate weapon reaches an approximately 4x damage multiplier at "full" strength. With Vincent this would require 6,912 kills while other characters, like Cloud, simply needs to stay at full health to achieve their max bonus. On the other hand, Death Penalty grants a damage bonus that can only grow, not decrease.

The number of Vincent's kills is capped at

, but, as the division by 128 is actually a right bits shift by 7 (logarithm in base 2 of 128), only the quotient is considered. This means the Power stat raises by

every 128 kills; in particular the maximum power is granted as soon as Vincent has killed

, which is greater than the cap. For a physical attack the Technique Power is always 16, therefore in that scenario the maximum power is

Though the gun is a rifle, Vincent wields it with only one hand like a pistol due to a lack of a two-handed animation. This would actually be a good technique to use with the M1855, since the gun commonly sprayed shards of lead into the user's non-firing arm, and had the risk of a chain fire, which destroyed the weapon and the users arm in the process. Commanders instructed soldiers to hold the weapon behind the cylinder to avoid being injured, meaning Vincent's one-handed method is the safest way to use it.

The weapon is affected by the Vincent Mug glitch.

Death Penalty is Vincent's ultimate weapon, now a large hand-cannon of custom make. It can be used in the last level when Vincent is in his Chaos form.

Unlike the original design, which is a rifle, the new version is a large handcannon-esque revolver made from metal with five unraveling barrels that form a cross motif. It has a menacing aesthetic using sharp and sleeked adornments in metallic gray and black.

Death Penalty is the most powerful weapon, firing deadly beams doing 2,000 damage to almost every enemy. As a drawback, it never deals critical hits, has a magazine of only 6, cannot be customized, and its ammo cannot be purchased.

Death Penalty is the Corsair's Mythic Weapon, which enhances the Quick Draw ability and has a unique Weapon skill called Leaden Salute. It is a large cannon not unlike a massive blunderbuss.

Death Penalties are dummied guns for Sazh, which reuse Total Eclipses' model. It appears to be a weapon for playtesting purposes.

Death Penalty is the weapon used by Admiral Merlwyb, commander of the Maelstrom. A replica called Death Sentence is also mentioned.

Firearms can be equipped by Noctis and Prompto.

When Prompto wields the Death Penalty, each shot of Piercer or Trigger Happy also has a chance of inflicting Instant Death on the opponent.

The Death Penalty is crafted from materials only available from DLC that was offered with the Collector's Edition.

An ideal world has no need of this gun's ability to turn sorrow and regret to power.

Death Penalty grants +15 to Attack. It can be equipped by Setzer, Balthier, Sazh, and Magitek Armor.

One of Vincent's cards can use Death Penalty as an ability. For a cost of Dulling Vincent, discarding another Vincent card, and paying five Light CP, Death Penalty lets the player choose any number of Forwards with a total cost of 7 or less, and Breaks them.

Death Penalty is a gun that can be equipped by Ryuma. 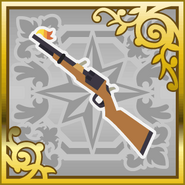 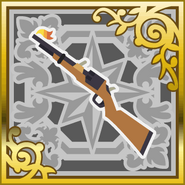 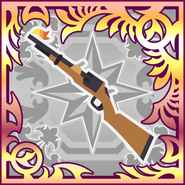 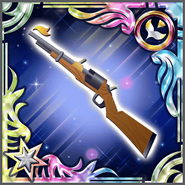 [view · edit · purge]The death penalty, known formally as capital punishment, is one of the highest sentences laws and states can give out to offenders and criminals, as a form of punishment, and to halt political dissent. The use of its name on the gun variety of weapons in Final Fantasy also likely refers to the use of fusillading, or firing squads to execute the sentence, in addition to referring to weaponry powerful enough to perform such a task.

The Final Fantasy XI incarnation of Death Penalty is also reminiscent of the execution method, "Blowing from [the] Gun", where one is tied to the mouth of a cannon and shot with it, ensuring a quick death.