Death Machine (デスマシーン, Desu Mashīn?, lit. Death Machine), also known as Warmech, Sky Base, Machine and WarMach, is a recurring enemy in the series. Though widely differing in appearance, Death Machine is a robotic enemy that can either be an extremely strong enemy, a boss, or a regular enemy.

Warmech is located in the Flying Fortress on the bridge leading to Tiamat, having a 3/64 chance of appearing. In its original appearance in versions prior to the Dawn of Souls remakes, it was the strongest enemy in the game, and while still a formidable foe in later releases, was surpassed by other enemies. Warmech regenerates 5% of its HP in most versions (it is bugged on the original NES release), and its most formidable ability is Atomize, which deals huge non-elemental damage to all party members. In the Dawn of Souls remake onwards, Warmech drops Genji Armor.

Warmech was named "WarMECH" in its original localized appearance, fitting into the eight-character limit. The Origins localization kept the name "Warmech" despite the limit no longer existing, likely due to the notability of this enemy under its original localized name. Its name was changed to "Death Machine" for the Dawn of Souls localization, but in one of only a few minor changes to the translation for the 20th Anniversary localization, the enemy's name was changed back to "Warmech".

Death Machine is an optional boss exclusive to the Finest Fantasy for Advance and Final Fantasy IV: The Complete Collection releases, fought in Cid's Trial of the Cave of Trials. It uses four attacks: Flame, Laser, Piercing Laser, and Object 199. Laser and Object 199 are virtually instant kills, while Flame and Piercing Laser only do moderate damage. It drops a Potion on defeat.

Death Machine is unrelated to the Final Fantasy IV enemy, and is based on the appearance in the Dawn of Souls remake of the original Final Fantasy. It appears in the Lunarians' Challenge Dungeons with Mythril Golem and a Steel Golem. It will use Meltdown once the Golems are defeated which can almost kill parties.

Death Machine appears in Kefka's Tower and in the Dragon's Neck Coliseum. As its name suggests, it uses Death attacks, such as Death, Lv.5 Death, and Blaster.

Death Machine can be fought in Junon after receiving the Buggy and returning to Junon on the Cargo Ship from Costa del Sol. It mostly uses physical attacks and Matra Magic, which can be learned by equipping an Enemy Skill Materia. The W Machine Gun, a Double AP weapon for Barret, can be stolen from them.

Death Machine is fought in the Cage of Binding in Banora Underground. Though it is based on the Final Fantasy VII appearance visually, its attacks are more similar to its Final Fantasy VI appearance, being mostly Instant Death attacks. Otherwise, it can inflict moderate damage.

Death Machines are a type of Garlean Magitek introduced in patch 5.5. The design of the Death Machine is based on its appearance in the NES and Famicom version of the original Final Fantasy, retaining the orange coloration of its body. They are first encountered in Zadnor as 4th Legion Death Machines. They are only Rank I, making them some of the weakest enemies in the area, in stark contrast to the enemy's usual level of power.

Death Machine is a boss, which is both fought and can be ridden by the player during battle. They will either shoot missiles or cast magic.

Death Machine appears as an enemy.

Machine appears as a boss in the Atomic Power Plant. Machine's slots are composed of the following: Dash, Beam, D-Beam, Laser, Balkan, Missile, N.Bomb, and Change. 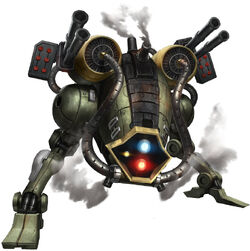 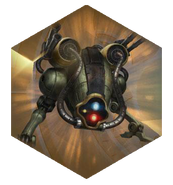 Death Machine appears based on its Final Fantasy VII appearance.

Its Esper version is also Fire elemental and focuses on Missile, Fire and Poison Resistance, as well as bonuses to DEF, Ice Eater and Machine Killer, and minor boosts to Evasion and Accuracy. Its Evocation, Nuke deals Fire damage (L) to enemies in range, and activates a temporary map effect (raises ATK for allies and decreases Fire resist for enemies).

Its Vision Card has high HP and at max level provides Pierce ATK Res+10 to the user and Area Attack Res+20 as a party effect. 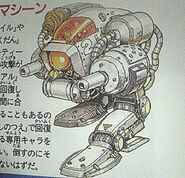