White Mage: Life's refreshing breeze, blow in energy! Cure!
This article can be improved in areas such as Add images to gallery at bottom, including missing images.
Please refer to the Manual of Style or editing help to get started. 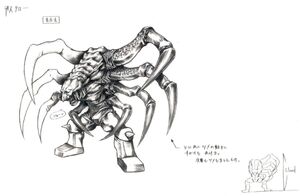 The Death Claw (デスクロー, Desukurō?), also known as Deathclaw, is a recurring enemy in the Final Fantasy series that made its debut in Final Fantasy III. It is usually an anthropomorphic, six-armed insectoid enemy with spikes at the end of each limb.

The Death Claws can be fought in the Cave of Shadows. It splits into two when hit by a weapon other than a katana. The Iron Claws is a stronger, gray palette-swap fought at the Ancients' Maze.

Death Claws can be found at the castle in the Interdimensional Rift. A weaker gray version with red claw tips, the Iron Claw is found in Karnak Castle.

Death Claws can be found at the desert near Corel Prison. They seem to have a skull for a head and the bones of the spine protrude through the skin. 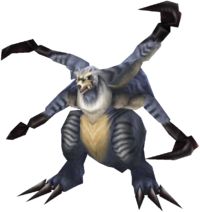 Death Claws can be found on the world map around Centra and inside the Galbadia Garden. In this version, Death Claws have a more mammalian appearance. In the Japanese version of the game, the Death Claw does not use the same name as other enemies of the same name in the series. The katakana is instead literally translated as "Wild Hook".

Mantises known as Deathclaws can be found on the Ridorana Cataract in Final Fantasy XII.

In the Bozjan Southern Front Critical Engagement, The Final Furlong, the player faces Spartoi, whose design is based off of the original Death Claw in Final Fantasy III.

Deathclaw is fought during the Breath of the Glacian Main Quest. It has very high HP.

Death Claw is an enemy family in Final Fantasy Dimensions. The standard form of the enemy appears only in a Challenge Dungeon which were only included in the original phone release, and therefore cannot be fought in any English version.

A green-colored Death Claw is likely a dummied sprite.

This section about an enemy in Final Fantasy Brave Exvius is empty or needs to be expanded. You can help the Final Fantasy Wiki by expanding it.
Enemies