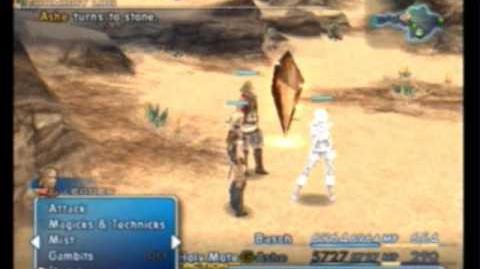 The dead character glitch is a glitch in Final Fantasy XII that involves dying during an Esper's Dismiss command animation, right when the character's action is about to begin, trapping them in a state of being flagged defeated, but remaining on the field, standing in place, not doing anything. Having a character like this on the field causes the enemies' special attacks being delayed indefinitely, rendering the enemy completely harmless.

Any attack that prompts the "X is readying Y" message to appear to the top of the screen, works, and is delayed forever. This glitch won't work against enemies that don't use "special attacks", but use only "normal" attacks, meaning this trick works against Yiazmat but not against Omega Mark XII.

The glitch is tricky to perform because the timing is so precise. The easiest way to deliberately cause the glitch is by employing the Petrify status, because petrified characters are flagged as defeated and is essentially the same as the KO status.

The player must first inflict Petrify on a character who has an Esper and who has their gambits turned off. Petrify in Final Fantasy XII works like Gradual Petrify in the other Final Fantasy games, and sets a time limit before that character turns into stone. The player can get the Petrify status simply by using a Gold Needle with the Nihopalaoa accessory equipped.

Once the counter is in place the character must summon an Esper and right before the petrifying counter reaches one, the player must activate the character's gambits, with a gambit where the character uses a mote of some kind onto themselves (any item that has a delay before being used works) as the first priority. Self: Holy Mote/Scathe Mote/Dark Matter will work. The player must then dismiss the Esper.

This glitch works in all versions of the game.