Edit
March 2015
Please note that the following article deals with the coverage of a fan-made product that isn't licensed by Square Enix.

Dead Fantasy is a series of fan-made CG action movies created by Monty Oum, starring a cast of characters from the Final Fantasy, Dead or Alive, Ninja Gaiden, and Kingdom Hearts game franchises, fighting it out against each other "battle-royale" style in a number of different environments, including archaic ruins and modern cities.

Since the first installment of Dead Fantasy, the series has been well-received by the fans of both game series, with trailers, previews and the installments themselves being featured at several gaming conventions. There are six movies in the series, and Oum had confirmed episodes VI through IX. It is unknown if these new episodes will be created due to Oum's death on February 1, 2015.[1][2] Since Oum's death three years later, a remake version of the series has now been created by Uiyahan as a tribute to him.

Dead Fantasy I introduces the first six characters. The fight takes place inside, and later outside, of an enormous, abandoned temple situated atop a tower. The movie was labeled by Monty Oum as the one he "wanted to do the least," as it only serves as an introduction for the rest of the series. Three years after Oum's death, animator Uiyahan created a remake of the first installment to follow Oum's legacy. It was unexpectedly released under the title of "Dead Fantasy 2020" on December 28, 2020 by youtuber sWooZie as a tribute to Oum despite Uiyahan stating that the first movie would be officially released in January 2021, which it later was on January 4.

The movie starts with Yuna running through the temple being pursued by two shadowy figures—Kasumi and Ayane. The three fight two-to-one. Yuna holds her own, but is nearly overwhelmed. Before she is impaled by Ayane, Rikku comes to her aid, evening out the numbers. The fight continues, destroying much of the interior of the temple. Hitomi appears to aid her fellow Dead or Alive fighters, and the fight moves outside of the temple. Ayane, Kasumi, and Hitomi overpower Yuna and Rikku before Tifa appears, evening out the sides. The film ends with the girls bracing themselves for another fight, showing the glowing Materia in Tifa's arm.

Dead Fantasy II is the first segment to show the use of magic on both sides of the battle, and the first to feature a character not directly linked to the series' namesake franchises: Kairi of Kingdom Hearts. The movie was featured at the Anime Boston convention on March 23, 2008.

The episode starts where Dead Fantasy I left off: a three-on-three battle with Tifa, Yuna, and Rikku against Ayane, Kasumi, and Hitomi outside the temple. Using different combo moves and team strategies, the girls of Final Fantasy overpower the Dead or Alive trio. Ayane goes to the top of the tower and charges her Ninpo power while Kasumi and Hitomi defend her. Yuna, Rikku and Tifa try to stop them, but Ayane destroys the temple with her magic—reflecting her ending in Dead or Alive 4—forcing them to fight during a vertical fall.

Halfway down, Rachel—who has been waiting perched on her Warhammer—destroys the rest of the tower, making them fall to a river of lava. The fighting continues as the girls flow downstream on a slab of rock until they hit a lava-fall. Rinoa freezes the lava and she and Kairi join the battle. Rinoa teleports the girls to different locations throughout the world: Rinoa is sent with Rachel, Tifa with Hitomi, Yuna with Kasumi, Rikku with Ayane, and Kairi by herself. The movie ends with Rikku and Ayane, both unconscious, falling into a giant hole.

Dead Fantasy III, which shows the first of a series of one-on-one battles between the different sides, was released alongside Dead Fantasy IV. It is the first installment to show physical repercussions from the battle, such as injuries, blood, and ripped clothing.

The episodes feature a Materia magic battle between Tifa and Hitomi within a partially demolished cathedral, which is set ablaze by Tifa's fire spell. Hitomi gets the upper hand beating most, if not all, of the Materia out of Tifa's body to use against her. The fight ends with Tifa being blasted out of the cathedral onto the snow outside, now seriously wounded. The movie ends with a scene of Helena activating an army of Kasumi α clones.

The movie starts with Kairi waking up on a deserted beach and finding a white feather. The scene shifts with the words "Why am I here? Because... I trust her... and because... you remind me of someone... that I said goodbye to... a long time ago..." reminiscent of the opening scene in Final Fantasy VIII, to a field where the one-on-one battle between Kasumi and Yuna takes place. The Kasumi α clones appear and attack the two. Yuna spherechanges into her summoner attire and tries to use her aeons to defeat them while Kasumi attempts to aid her. The clones overpower the aeons, and Yuna reverts to her Gunner dressphere.

Before the clones deliver the final blow Cloud appears, ready to aid Yuna. Kasumi teleports herself and the clones away to fight them on her own. Cloud drives Yuna to a city on his Fenrir, and on the way Yuna falls asleep. The movie ends with a flashback of Cloud trying to stop Tifa from falling off the cliff near the ruins of Midgar.

The fifth installment is a direct sequel to Dead Fantasy III, and shows what happens to Tifa and Hitomi after their one-on-one battle in the cathedral. It introduces the first male Dead or Alive characters of the series.

Hayate and his ninja clan take over Hitomi's fight and pursue Tifa, forcing her to face many enemies at once while bleeding and exhausted. After being chased along a train, she jumps to a warehouse. Cornered, she fights the horde of ninjas and has a flashback of her goodbye with Cloud and her arrival to the temple in Dead Fantasy I (the scene Cloud remembers in Dead Fantasy IV).

Tifa disembowels and kills her assailants while attempting to strike Hayate. He refuses to fight, instead teleporting past her. Tifa succumbs to her injuries and collapses. When Hitomi catches up with them and sees Tifa in the bloody state, she slaps Hayate. Helena arrives in a DOATEC helicopter with a squad of armed personnel and takes Tifa on board where she could be treated or experimented on. Hitomi, after showing Helena the White Materia in her right wrist, boards the helicopter with them, leaving Hayate alone in the snow.

Kasumi battles the Kasumi α clones in a lake. She has killed off most of them, but is exhausted. Ryu Hayabusa arrives, killing the last of the clones and catching Kasumi as she collapses. Momiji, who appeared alongside Ryu, reads Kasumi's mind, and sees the events that have happened so far. The three disappear, likely to get Kasumi aid for her wounds, and leave a bloody lake littered with dead clones behind. The movie ends with Cloud and Yuna watching the helicopter carrying Tifa fly towards a luxurious city.

This episode takes place in a one-on-one battle between Ayane and Rikku in an underground cavern and its hidden laboratory. In both previews, they clash weapons until Rikku spherechanges multiple times but Ayane negates all of her attacks in her various forms. Rikku uses her special dressphere, the Machina Maw, and Ayane's primary weapon, Tokkosho, is replaced with Fuma Kodachi twin blades to confront Rikku's ultimate dressphere. The Machina Maw lands on the ocean waters creating a devastating wave. Ayane defends herself using her Fuma Kodachi twin blades to make her land on the upper steel ground, and she confronts the Machina Maw in its gigantic state.

Tifa awakens in a white room covered in a silk sheet, knowing of her survival in her fight against Hayate and his shinobi (while being held captive in DOATEC headquarters). Her eyes light up as she is being experimented on by DOATEC.

This episode takes place between a one-on-one battle between Rinoa and Rachel. In some screenshots, Rinoa chains her rival Rachel to become a Fiend to meet the same fate as her sister Alma. Rinoa fights fighter jets from DOATEC using her Sorceress Magic.

The eighth installment takes place in the beginning of Dead Fantasy IV after Kairi was teleported on the beach by one of Rinoa's conjure portals. This is the last preview Monty released in A-Kon 22 before he focused on the RWBY series in Rooster Teeth and his death on February 1, 2015.

At sunset in a metropolitan city, Kairi balances along the top of a high building. She backflips onto the roof of a hotel at a crossroad, and takes out the white feather she found in the beach. Ryu Hayabusa and Momiji approach Kairi, who summons her Destiny's Embrace and slashes the feather in half. It explodes into a flurry of colored feathers as a white mist bursts across the entire city, changing the sunset into a dark cloudy sky.

Ryu steps back allowing Momiji to wield her Heavenly Dragon Naginata, challenging Kairi to a fight. Kairi's Destiny's Embrace transforms into Lunar Eclipse and she allows her Nobody, Naminé, to take control of her, as white Keyblade wings unfold from behind her. Momiji and Naminé do battle and Naminé has the upper hand, eventually manipulating the red-black Keyblade that manifested from her Keyblade wing to levitate. Ryu sees the oncoming attack and grabs Momiji, barely dodging the Keyblade as it hits the floor with a blood-red mist, creating a red pool.

Gaining some ground from Naminé, Momiji thanks Ryu. The red and black Keyblade sinks into the floor and Vincent Valentine rises from the pool. Ryu unsheathes the Dragon Sword, while Momiji wields a pair of sai daggers. Vincent approaches the two ninja, and Naminé calls forth her Keyblade wings.

The ninth episode takes place where Cloud teams up with Yuna to rescue Tifa from being held captive in DOATEC Headquarters. Cloud will face his rival, Helena Douglas, due to her resemblance to his deceased friend, Aerith Gainsborough, and his nemesis Sephiroth.

The project started in July 2007 after Monty Oum gained acclaim for the creation of the fan made CG movie Haloid, which featured Metroid series's Samus Aran fighting the Dead or Alive series's Nicole. His intention for Dead Fantasy was to create a new CG movie which featured more human characters, instead of simply "humanoid" characters, as was the case in Haloid.

While Monty used the original voices of the Dead or Alive cast, due to lack of voice clips or none at all, he used voices from different sources for the Final Fantasy characters.

In August 26, 2018, three years after Monty Oum's passing, animator Uiyahan created a remake version with more realistic and true-to-original characters, including facial expressions. Uiyahan is also revealed to use the original voice clips from the Final Fantasy cast to match up with the Dead or Alive cast following the release of Dead Fantasy 2020 by sWooZie as a tribute to Oum. However when Uiyahan officially releases the remake version of the series, their respective voice clips are their original voices that Monty had previously used. 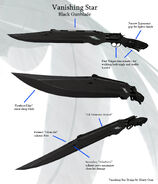 Concept art for the Vanishing Star.

Screenshot from Dead Fantasy I of Kasumi (background) and Ayane.

Screenshot from the end of the first movie, showing Tifa glowing with Materia.

Screenshot from Dead Fantasy II—the bottles in the foreground are based on the FFXII Energy Drink Bottles.

Screenshot of Rinoa in Dead Fantasy II, showing her trademark expression of request to the camera.

Screenshot of Dead Fantasy II of (from left to right) Yuna, Kairi and Rikku.

A early promo poster for Dead Fantasy III before the plot was changed, featuring Ayane and Rikku.