A lifeless desert within which rests a holy relic.
This region is covered with endless desert sands as far as the eye can see. Within it can be found the shanties which form a base for treasure hunters seeking their fortune in the arid wilderness, as well as ancient ruins said to conceal a divine treasure.
Many monsters with a character unique to the area appear in this region, such as the sand swimming fiends of the open desert and the undead horrors that lurk within the ruins.

The Dead Dunes is the desert continent in Nova Chrysalia in Lightning Returns: Final Fantasy XIII. The area is dotted with ruins and Lightning can slide down the steep dunes. An oasis village serves as a base for the local bandit group called Monoculus. The fal'Cie Atomos and parts of Titan are found among the sand, rendered immobile, suggesting the Dead Dunes was once the Archylte Steppe.

This area is much more sparsely populated than the other areas of Nova Chrysalia and has fewer quests. The desert is considered more dangerous during the day time, when the toughest enemies come out. The ruins below the desert don't have a day and night cycle. The player can fast-travel the area via the red cactuar waystones, which are scattered around the desert and in the ruins below. The player can collect "Unappraised Items" around the desert and have them appraised at Ruffian, the oasis town amid the desert.

The fringes of this desolate desert are lapped by the ocean of Chaos. It is not a place meant for human inhabitation, but thanks to the ancient ruins that are scattered among the dunes, many lawless bandits have come here to plunder the treasure within. In the desert, wild monsters are most active during daylight hours. Unlike other parts of the world, nights in the desert are blessed by relative peace and quiet.

Centuries of plundering have emptied most of the ruins, but one legendary treasure—the holy clavis—still sits beyond a seal that no one has been able to break.

Lightning arrives on the Dead Dunes following the rumors that an artifact called the holy clavis is buried somewhere in the desert. Suspecting the local bandits know something about it, she locates their settlement, Ruffian. Lightning speaks with a Monoculus member named Adonis, who says they won't divulge anything until Lightning joins their gang. As a trial, Adonis tasks Lightning with stopping the sandstorm known as God's Wrath that blocks a path to the settlement. After defeating a Gurangatch, Lightning obtains a crux which helps her operate a monument to quell God's Wrath.

Adonis accepts Lightning as a part of Monoculus and reveals the group's boss is a woman who knows Lightning and has been keeping tabs on her ever since she got off the monorail at the station. Back in the Ruffian, Adonis introduces Lightning to the boss, her old friend Fang. Fang explains she left the Order of Salvation in Luxerion and is now looking for the clavis, and asks Lightning's help.

Fang and Lightning team up and head for the Temple Ruins, an ancient maze under the desert. As Lightning is the savior she can open the doorway. Fang and Lightning locate tablets from shrines around the desert and use them to activate murals within the ruins to open the chamber where the clavis is kept. The murals spell humanity's creation story, showing how Goddess Etro's blood birthed mankind, whose souls would cycle between death and rebirth. The god Bhunivelze, however, saw death as impure, and thus deemed the souls of the dead as tainted.

Lightning and Fang reach the clavis, and to Lightning's surprise Fang sets out to destroy it. Lightning stops her. Fang explains her friend Vanille wants to use the clavis to draw in the anguished souls of the dead from the Chaos so that the Order can destroy them, but the ritual would kill her. Lightning is shocked the Order wants to eradicate the souls of the dead, and that Vanille is onboard with their plan.

The Order's military branch, the Secutors, arrive to claim the clavis and send a monster after Lightning and Fang. The two defeat the monster, but meanwhile the Secutors nab the clavis and seal the pair within the chamber. The mysterious Lumina appears, gloating how she led the Secutors to them. She looks forward to Vanille performing the Soulsong on the world's final day to obliterate the souls of the dead, including Lightning's sister Serah. Lumina opens the chamber's door and disappears.

Lightning tells Fang she cannot save Vanille if she is bent on dying, and says Fang is the only one who can convince her. Fang departs, saying the Monoculus is officially disbanded, and the two promise to meet in Luxerion on the eve of the Apocalypse.

The headquarters of Monoculus is located here. The settlement has shops, an inn, a sorcery shop, a boy who will appraise the Unappraised Items the player can collect from the lizards on the desert and the skeletons in the ruins, and a restaurant.

The large area where the monorail stops is known as Giant's Sandbox. Chocolina's Canvas of Prayers is found just outside the station with a merchant and an outfitter.

Entrances to different parts of the Temple Ruins are found at the sandbox, and the superboss Aeronite patrols the dunes here after Day 7. A merchant is camping out here next to the north entrance to the Temple Ruins, who is part of a mission the player can start with the item shop owner in Ruffian.

Grave of the Colossi[]

There is Bhakti's Oil under the skeleton of an oretoise, and a shrine where one of the tablets that activates a mural in the ruins is located. If the player quells a sandstorm near here, they can open a new area that has a quest item and a treasure sphere locked by Lumina that requires Energy Points to open.

Area of the Dead Dunes where the fal'Cie Atomos's remains lie. It is assumed that Atomos had felt God's presence, prompting it to enter into a form of stasis while it waits for the world to end. The people residing within the Dead Dunes view the area as a "public dumping ground", prompting Adonis to post a bulletin about littering. Lightning can find a loupe on the ground near here for the boy who wants to appraise items back in Ruffian. There is also a shrine for one of the tablets needed to activate murals in the Temple Ruins here with a cactuar waystone outside it.

The way to the lighthouse is blocked by a sandstorm that has a Cactair caught in it. Defeating it earns one of Dajh Katzroy's soul fragments needed for a main quest in the Wildlands. The player can battle Cactuars here who drop good gil and locate the quest giver for the game's most arduous quest: to fell every Last One enemy. Because some enemies only appear in the final dungeon this quest cannot be completed until in New Game Plus.

The lighthouse is lit between 6pm and 6:55am.

There is a shrine for one of the tablets needed to activate a mural in the Temple Ruins here. Otherwise it is a large and empty sandy area that has been left abandoned. There is a look-out post Lightning can climb, but no one else ever ventures out there but Lightning, and randomly Sazh Katzroy when his quest for soul fragments (in the Wildlands) has been started but not completed; if Sazh appears, he is to the east from the Oasis Lighthouse, and stays around for one in-game hour.

Temple Ruins is an expansive maze below the sands. The structure is ancient, predating Cocoon, and nobody knows who built it or why. The ruins are said to hold the holy clavis, an artifact that can draw in the souls of the dead. The ruins are littered with murals that spell the creation story of mankind. The temple is filled with sealed doors that operate via magic and mystical tablets and cruxes are needed to delve deeper into the ruins. The skeletons standing guard can be torn apart to reveal Unappraised Items and Yellowed Skulls, but sometimes this also initiates a battle. 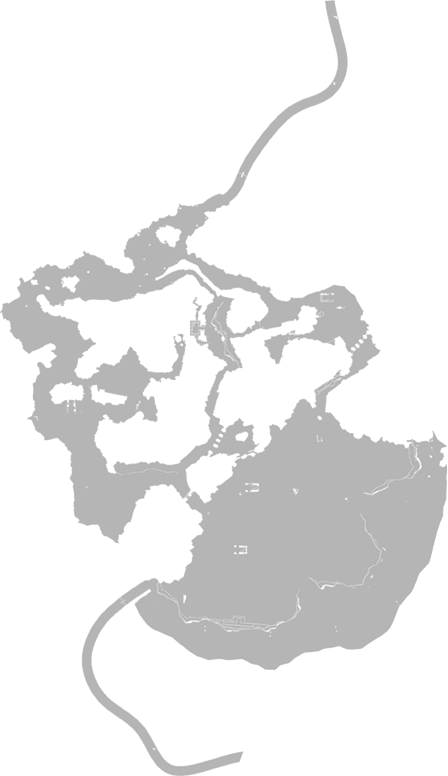 Lightning can slash lizards that wander the desert for lizard tails and unappraised items, the latter having a 40% chance of dropping. Lizards will respawn after 12 hours. Slashing 30 lizards in the Dead Dunes earns the Lizard Lariat achievement.

The superboss Aeronite roams around Giant's Sandbox from Day 7 onwards, its location depending on the clock.

The theme that plays depends on the time of day. "Desert Awakening" plays in the morning, "The Dead Dunes" plays in the afternoon and "Desert Lullaby" plays in the evening. "Graveyard of Dreams" plays during the night. "Bandit Gang Monoculus" plays when Lightning reunites with Fang and "Fang's Theme ~The Boss~" is Fang's leitmotif that plays in scenes associated with her. "Treasures Within" plays in the Temple Ruins. "Village and Void" plays in the Grave of the Colossi area during the day.

In the Ruffian bar a singer performs a vocal arrangement of "Eternal Wind", the theme of Final Fantasy III. A full arrangement of the song appears on the game's Original Soundtrack PLUS.

The Dead Dunes appear as the background for the Field Music Sequence of its eponymous theme.

The Dead Dunes were inspired by real-world location Cairo.[2] Early screenshots differ from the gameplay demo shown during Japan Expo 2013: while early screenshots suggest Lightning was meant to look for a hidden treasure, the treasure became the holy clavis artifact. In early screenshots, Adonis wears silver as opposed to his final red color. Another screenshot displays Lightning fighting Vali and Hanuman in the Dead Dunes, whereas in the final game these enemies only spawn at the Wildlands.

The Dead Dunes are likely the dried remains of the Pulsian Archylte Steppe. A skeleton of an oretoise is found buried in the sand, creatures only found on the steppe in both Final Fantasy XIII and Final Fantasy XIII-2. Other landmarks from the steppe are the cactuar waystones and the dormant fal'Cie Atomos and the pieces of Titan.

The small lizards roaming the sands use the same model as a staggered Gurangatch. 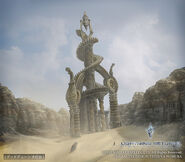 Concept of a lighthouse.

Concept of a lighthouse.

Logo of the Dead Dunes viewable through mobile devices on the official Japanese site.

Logo of the Dead Dunes as seen in the location's trailer. 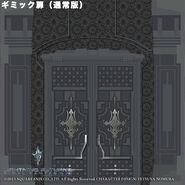 Grave of the Colossi (Shrine of Long Gui in early demo).

A view of ruins in the desert.

A view of the location marked as "Ancient" on the official Japanese site.