From the Tomb of Raithwall, lost at the top of Pharos

Reduces MP and Mist Gauge to 0

A piece of magicite left by King Raithwall. It signifies descent from the Dynast-King.

Dawn Shard is an accessory in Final Fantasy XII that boosts the wearer's Magick Resist at the cost of reducing their MP to 0, and in the Zodiac versions, prevents the player's Mist Gauge from rising, making the wearer unable to use magicks, Quickenings or Espers. The accessory's effect is similar to the Goddess's Magicite, another storyline-relevant item that doubles as an accessory.

In all versions, Ashe earns the Dawn Shard in the Tomb of Raithwall after the party bests Belias in battle as part of the story. It appears in some cutscenes from there on and the player can equip the accessory onto anyone to boost their Magick Resist, at the cost of dropping their MP and Mist Gauges to 0. The accessory is lost at the top of Pharos and the player can't get it again, but in The Zodiac Age versions, the player could still get the similarly-working Goddess's Magicite from the Trial Mode and bring it to the main game.

The Dawn Shard, though usable as an accessory and there is a requirement to do that once as part of the story, is more of a story item; though the Magick Resist +20 is a good boost, the permanent 0-MP status it confers is a large handicap, disabling magick-use, Quickenings and Espers. While the Dawn Shard is equipped, nothing will restore the wearer's MP except removing the shard.

In the Zodiac versions it is more usable, as the job system has jobs that learn almost no magick, anyway. It could be good against enemies that use a lot of magick, especially when coupled with Shell, and the wearer can still use items to compensate for their inability to use magick. However, the inability to partake in Quickening chains is a big downside.

The player must equip the Dawn Shard onto their party leader in the Stilshrine of Miriam to activate a pedestal to be able to progress deeper into the dungeon. After activating the pedestal, the player can remove the accessory. 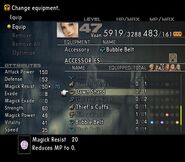