Claws from a faraway world infused with dark powers. Melee weapons are mainly used by monks and black belts, but it seems as if these claws were also used by onion knights in a faraway world. It is said that the Warriors of the Light obtained this melee weapon from within the Cave of Shadows.

Dark Claws is the second strongest fist weapon, obtained only in the 3D remakes in the Cave of Shadows. It provides 115 Attack and can be equipped by the Onion Knight, Monk, and Black Belt.

Claws that may cast Poison upon striking an enemy.

Venom Claws (originally called Poison Claw), is a mid-ranked weapon for Sabin. It has an attack power of 95, is Poison-elemental, and randomly uses Poison when attacking with it. It can be bought for 2,500 gil in the World of Balance in Albrook, Maranda, and Vector, and from Tzen in the World of Ruin. It can also be stolen from Killer Mantis.

Darksteel Claws are hand-to-hand weapons that provides +11 damage and +66 delay. It deals +2.42 damage per second and accumulates +4 TP per hit. It can be equipped by level 52 Warrior, Monk, Dark Knight, Beastmaster, Ninja, and Puppetmaster. It can only be obtained through synthesis.

Dark Claw is a mid to high-ranked claw that provides 66 Attack, 20 Hit Rate, and can inflict Curse when attacking with it.

Darksteel Claws is a level 22 grappling that provides +35 Bravery, +18 Attack, and Chase BRV Damage +20%. It can be obtained from the shop by trading 66,00 gil, Metal Knuckles, and Iron Carapace.

Dark Claws is a fist that provides 67 ATK. It is obtained during the Final Fantasy III event, Doga's Grotto.

The Skull Dissect is the ultimate weapon of Kevin should he undergo the Dark/Light path of the Grappler, the Death Hand. It is a clawed glove with long, opaque black finger claws, a skull motif on the back of the hand, and is further constituted of chain mail mesh. Considered a horrific weapon bearing demonic influence, those that wield it are demanded to temper themselves to its malefic control, or are subject into a frenzied insanity. The finger claws are said to be made for the grisly purpose of targeting the skull and head of the enemy to attack the brain. 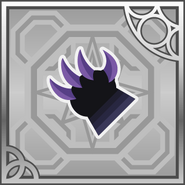 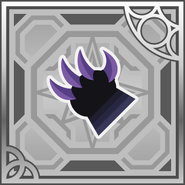 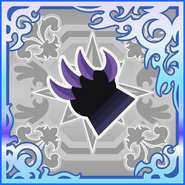 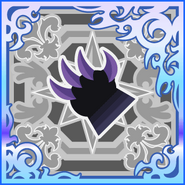