Final Fantasy Wiki
Register
Don't have an account?
Sign In
Advertisement
in: Characters in Final Fantasy Crystal Chronicles: My Life as a King, Antagonists, Kings 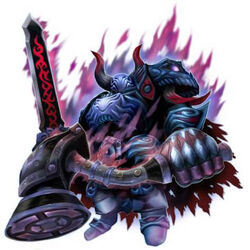 Long ago, a Selkie youth set out on a journey to find a new home after being shunned in his old. It is said he eventually formed his own kingdom, but no one knew how he overcame the miasma. I have heard that people exposed to the mist turn into monsters. What if that boy became the Dark Lord?

Although it is stated that the Dark Lord was born from Miasma, it is known that some monsters were once human before being turned into monsters by the mist. It it revealed by Chime and random Citizens of Padarak that the Dark Lord was possibly a young Selkie who set out to find a new home after being shunned in his old and turned into the evil lord after spending time in the miasma.

When he came to the frontier land, he was granted the power of Architek by the crystal that resided in the land and began to create a new kingdom that would become a paradise for monsters. After the miasma cleared, the Dark Lord lost his form and burst, his body turning into Elementites. All that was left of him was his heart that was kept within the crystal.

The Dark Lord, taking the appearance of King Epitav, appears to King Leo as the construction of the kingdom is beginning. He thanks Leo for the work he has done and ask him to continue his work. His motives are unknown until the second time he appears, revealing his true form and that the Elementite the Adventurers were collecting in fact restored his true form. He then reveals to Leo that his father is still alive and he has him captured. He then heads to the Shrine of Awakening, where he is keeping King Epitav.

After he is defeated by the adventurers, he reappears before Leo and tries to take him to the land of the dead with him. However, after realizing how all his people are willingly trying to protect him, he releases Leo. Before been vanquished by the king, he grieves on how he could never win the hearts of his people, and asks the little king if maybe he had won his. With his final words, he acknowledges Leo as the only one worthy of the title of Archlord.

After being defeated by Leo, Craydall withdrew himself totally into the Dark Crystal inside the Flying Darklord Tower, where he created a haven for the monsters once the miasma cleared. Sometime earlier, he also planted a disguised Clavat among the ranks of Tonberries that served his daughter. As years passed by and his daughter never spoke to him, he started to talk to himself. One thing led to another and he became the narrator of Mira's actions.

When his daughter discovered Tonbetty's true identity, she was ready to finish her off, until Craydall appeared before her. He explained that she needed to mature as a person before she could take the mantle of Darklord. He lays before her a battle with a most courageous king, who filled the lives of his people with happiness, and a decision of what kind of Darklord she will become. Once Mira vows to make a war for peace between people and monsters, he returns to the Dark Crystal without regrets.

Main article: Dark Lord (My Life as a King)

The Dark Lord is fought as the final boss in the Shrine of Awakening. 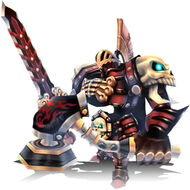 The monster Death Knight appears as one of the monsters that can be summoned by Mira when purchased as an extra download content. He takes on the appearance of Darklord Craydall with a different helmet.

[view · edit · purge]Dark Lord is another name for the Devil, the personification of evil in certain religions. In fiction, Dark Lord is often used to refer to a powerful antagonist with evil henchmen.