Deals great physical damage to target and nearby foes in exchange for Lightning's own HP.

Reduces your HP to cause Shadow damage to the enemy.

Steiner has Darkside as a Sword Art. It deals Shadow-elemental damage 1.4 times as strong as a normal attack in exchange for 12.5% of Steiner's max HP. Darkside will ignore Mini status if Steiner is afflicted, and also ignores the target's Protect status. It will inflict higher damage if Steiner is equipped with any equipment that increases Shadow damage.

Darkside requires no MP to use and is the only Sword Art at zero MP cost, making it a viable option should Steiner use up his MP with Sword Magic and Sword Art attacks. It is learned with the Blood Sword, which absorbs HP from the enemy making the combination of said sword and Darkside viable early in the game and in Ipsen's Castle.

The formula for Darkside is as follows:

Darkness is a physical ability exclusive to the Dark Knight garb. At the expense of 20 ATB points and some of her HP, Lightning deals physical damage with a Strength multiplier of 3.50, and it has E rank Stagger Power and A rank Stagger Time.

Shadow Blade is the Focus attack of the sword Ragnarok. The user rushes towards the enemy delivering a powerful slash that releases a dark crimson burst of energy on impact, delivering heavy damage at the cost of half of one of the users Hearts.

The Core job Dark Knight has Dark Sword as his default Soul Break. At the expense of one Soul Gauge segment and the cost of 12.5% of max HP, the user deals physical ranged damage to one target equal to 170% of a conventional attack. 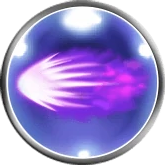 Icon in Final Fantasy Record Keeper.
Add a photo to this gallery

Retrieved from "https://finalfantasy.fandom.com/wiki/Dark_Sword_(ability)?oldid=3314554"
Community content is available under CC-BY-SA unless otherwise noted.