Dark Spark (黒の衝撃, Kuro no Shōgeki?, lit. Black Spark), also known as DrkShock, BlakShock, and Dark Shock, is a recurring ability in the series. It generally halves the target's Level.

Dark Spark is a Blue Magic spell that a Blue Mage may learn from the Black Flame, Strapparer, Ushabti, Hades, Azulmagia, Shadow, and Druid enemies. It costs 27 MP to cast. It can also be used by catching and releasing a Black Flame.

Dark Shock is an enemy ability used by Gargoyle Baron, Piscodaemon, Mindflayer, Larva Eater, and Arioch. It inflicts either Blind or Sap at a 70% chance as well as Dark-elemental physical damage to one ally. 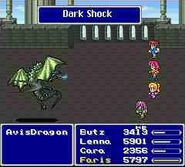 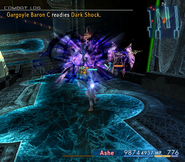 [view · edit · purge]Shock refers to a dangerous condition that disrupts the blood flow of the body. Electric shock is the physiological reaction or injury caused by electric current passing through the (human) body.