The Dark Sage, also known as the Warlock and Dark Wizard, is an enemy in the Final Fantasy series. 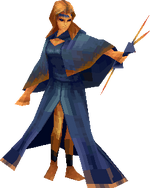 she casts level 3 magic on the party and is highly dangerous, especially if a group of them is encountered. Inflicting Confuse on the Dark Sage, such as with the Fairy Rod, will cause her to use only Break on herself or other enemies. Defeating Dark Sages can be highly rewarding if they leave behind precious Dry Ether, Soma Drops, and Ribbons.

They can cast level 2 elemental spells on the party, but are susceptible to Pig, which can be inflicted instantly and with a 100% hit rate by using the Polymorph Rod. While piggied, they can only use physical attacks. Even without Pig, they are not very difficult enemies to defeat, and some physical attacks coupled with Quake or Bio is more than enough to defeat them with ease.

Enemies
Retrieved from "https://finalfantasy.fandom.com/wiki/Dark_Sage?oldid=3239545"
Community content is available under CC-BY-SA unless otherwise noted.