Dark Mindy is an optional boss in the International, PAL, and HD Remaster versions of Final Fantasy X. She is encountered at Mushroom Rock Road after the party has the Fahrenheit. She can be fought together with her sisters, Dark Cindy and Dark Sandy; together only to Dark Sandy; or alone if the player manages to escape the other two.

As long as she is fought alone, Dark Mindy is easier to defeat compared to her sisters when fought alone but should not be underestimated. Passado targets one character, consisting of 15 hits, so as long as at least two party members have the Auto-Phoenix ability, the attack is not so dangerous.

When she is alone, or only with Sandy, her Overdrive is Mega-Graviton. It causes magical fractional damage at 43.75% of target's max HP, as well as several status ailments: Doom, Slow, Sleep (for 99 turns), Darkness (for 99 turns) and Silence (for 99 turns). Occasionally, Dark Mindy will also use Calamity to inflict Curse, Poison, Full Break, Darkness and Silence on one target.

When Mindy is fought alongside both Sandy and Cindy, the trio will use their deadly Delta Attack Overdrive executed only by Dark Cindy, which always deals 99,999 damage per hit (6 total) and removes Auto-Life. Mindy has the least HP, but her Evasion is so high that she is difficult to hit unless the player has high Luck or uses 5x Aim (possibly combined with 5x Luck). Her Overdrive gauge increases by 5% when targeted and 20% when attacking.

The entire party would optimally be stat-maxed (except for Magic unless using Ultima against the entire trio), and if the player plans to use physical attacks, Luck should ideally be very high. If the sisters are fought together Dark Mindy should be killed last as she takes the least number of attacks. Sandy should be killed first as she has less HP than Cindy.

Dark Mindy is the most evasive enemy in the game, and is the sole reason for having 230 Luck; 205 Luck is required to never miss her, which increases to 220 if under Darkness, while 230 is needed to ensure critical hits without fail. The Aim, Luck and Jinx abilities could also be used to hit her reliably without needing high Luck.

When fighting all three sisters at once, the Magus Sisters always use Delta Attack as their opening move, so the player will need a character with First Strike on their weapon (either Yuna or another character who switches out for her) and summon the Magus Sisters to take the hit. Doublecasting Ultima damages all of them greatly if the party has good Magic stats. Anima's Oblivion also does good damage but it can only be used once in the battle since Anima will be killed after using her Overdrive. One strategy would be to focus attacks on Dark Mindy (physical attacks are enough for this, if they can hit her) until the sisters are about to get their turns, then summon Anima to use Oblivion, hopefully killing Dark Mindy. Once she falls, the battle will become easier.

As with any other enemy, Dark Mindy can be killed instantly by Yojimbo's Zanmato attack, along with the other Dark Magus Sisters if the player fights more than one of them. 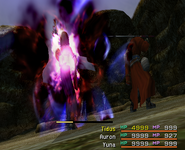 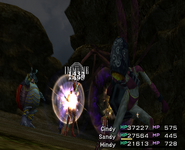