Dark Messenger (闇よりの使者, Yamiyori no Shisha?), also known as Evil Messenger, is a recurring summon ability in the series, and is the signature attack of Diabolos. It generally inflicts fractional or Dark-elemental damage.

A separate ability known as Ruinous Omen also appears in the series, serving as Diabolos's signature attack in the online installments. The attack functions similarly to Dark Messenger, dealing either dark-elemental or fractional damage.

Dark Messenger is the summon ability of Diabolos, which inflicts non-elemental damage equal to 15/16th of the target's HP while ignoring Death resistance and also inflicts Sap at the cost of 100 MP.

Dark Messenger is the summon ability of Diablos, which inflicts fractional non-elemental damage to all enemies equal to the following formula:

Damage is capped at 9,999 HP, regardless of how high the damage may go.

Evil Messenger is the summon ability of Diabolos, costing 64 MP to use and requiring Summon Magic of at least level 6 to use. It inflicts major Darkness-elemental damage to all enemies.

Dark Messenger is a summon attack available for Morrow, Jornee, and the Deathlord when equipped with their respective versions of the Diabolos signet. The attack deals heavy dark-elemental damage to all enemies. It costs 3 summon gauges to perform.

Dark Messenger appears as Diabolos' signature attack. Diabolos will first charge 2 black holes, before merging it into one, and creating a dark sphere that bats fly around. The sphere will usually indirectly home in on the target with the most Malice. When it either hits the ground or a target, it creates a giant black hole that sucks people around it (except for Diabolos) into it. The damage is usually around 1000 if one gets sucked into it. If someone is directly hit by the attack, their HP will usually be reduced to one, and they will be trapped. However, this attack cannot KO the player(s), but it can allow Diabolos to easily KO a trapped player using another attack. 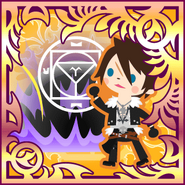 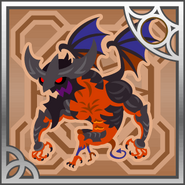 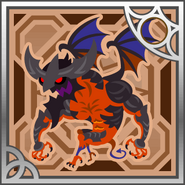 Enemy version of Dark Messenger colliding with the player in Final Fantasy Explorers.