I've heard that the means for makin' dark matter can be found in a grimoire carried by some evil folk. They say that the recipe's been divided into two books, though, to prevent pryin' eyes from seein' it. And, harken to this: they say that if you were to stack them on top of one another and wrap them up together in a severed bat wing, the whole lot would fly off, recipe an' all! What I wonder is: how did someone come to find that out then, eh? Load of old codswallop!

Dark Matter (ダークマター, Dākumatā?) is a recurring item in the Final Fantasy series. It is usually a very rare item, with special effects.

The Dark Matter can be stolen from Zeromus in the final battle, using Edge's Steal command. In the original version of the game, it serves no real purpose. Early theories speculated it lowered the power of Big Bang, but this has been proven false. Final Fantasy Ultimania Archive, Volume 1, states that there is a very low chance of stealing it and thus doing so successfully is a "cause for celebration despite its questionable utility." The Dark Matter is dummied out of the North American SNES version and the Easy Type version.

Dark Matter is a dummied out item, only accessible via hacking.

The Dark Matter is a Chemist's mixing ingredient. It is the opposite of Holy Water, and if the two are mixed, it will create a dud. However, if combined with a Phoenix Down, it will create the incredibly powerful Death Potion item.

Dark Matter is a Materia Fusion component that adds +1 MAG to the resulting Materia. Dark Matters are easily farmed end-game; by killing Lesser Worms the player can get plenty of Dark Matter drops by equipping the Mog's Amulet. The drops can be doubled by also equipping a Jeweled Ring.

The Dark Matter can teach Quistis the Blue Magic spell Shockwave Pulsar. It is a tool that Siren can refine from 100 Curse Spikes (the best method to farming them is from Tri-Faces) as long as she is level 100 (original PS version; any level is fine for PC and Remastered). It also refines into 100 Ultima spells.

Deals damage to the target. Equip as an Add-on.

The Dark Matter is a winnable item from the Treno Auction House and allows Dagger to learn Odin as a summon. It increases Strength by 3 and Magic by 2 when equipped as an add-on.

The Dark Matter is an item used with the Use command, which deals non-elemental Magic damage in the same manner as the spell Ultima and Flare. It can be used to customize equipment to add Break Damage Limit and Ribbon (Ribbon is only in the International, PAL and HD Remaster versions). Dark Matter is a rare drop from a large number of powerful enemies, and unlocking Ultima Buster in the Monster Arena (after catching five of every enemy across Spira) earns x99 Dark Matters.

Dark Matter is an exceptionally rare item obtained in the Via Infinito by bribing Paragon or receiving as a drop from Trema. An Alchemist can mix it with any other item, creating the Miracle Drink effect. One of Lady Luck's Random Reels results is named Dark Matter; it does 9,999 damage.

Meteor can be taught to a creature by consuming a Dark Matter on it.

Dark Matter is used to Augment certain equipment obtained in Reisenjima. It can produce greater and more random results than the usual augmentation stones. Dark Matter is also used to upgrade body-slot Empyrean Armor to Item Level 119. It is obtained in Vagary.

Dark Matter is a rare item available from chests, the bazaar, and the clan shop after achieving the highest clan ranking. It can also be stolen from The Undying during the final battle.

Dark Matter adds up the damage from every Knots of Rust used since the last time a Dark Matter was used, and deals that damage in one hit. The two abilities used by the Esper Shemhazai when summoned, Devour Soul and Soul Purge, have the same effect as using a Knot of Rust and Dark Matter, respectively.

The damage formula for Knot of Rust and Devour Soul is:[1]

The damage formula for Dark Matter and Soul Purge is:

Knot of Rust damage caps at 9,999 in the original version, while Dark Matter and Soul Purge cap at 60,000. The damage counter resets after each use of Dark Matter or Soul Purge. Both are unaffected by Reverse and have the maximum effect capacity, meaning no other spell or Technick can be performed simultaneously. The Zodiac Age no longer has this limitation.

In the original version Dark Matter can be made in the bazaar by selling Bat Wing x1, Grimoire Aidhed x3, and Grimoire Togail x3. The sixteen chests on Phon Coast and the sixteen chests in the Necrohol of Nabudis correspond to each other. The Zodiac Spear can be found in the Necrohol of Nabudis, meaning if the player claims the chests on the Phon Coast before obtaining the spear, it will be forever lost. However, if the player is to open the chests with the Diamond Armlet on, they will all contain Dark Matter instead of Knots of Rust. The chests can be claimed in either Necrohol of Nabudis or Phon Coast, and once claimed, will disappear from both locations, and will never respawn. It is recommended the player first finds the Zodiac Spear, and claims the other chests later with the Diamond Armlet equipped to get the Dark Matters. The mechanic of forbidden chests is no longer present in the Zodiac versions.

In the Zodiac versions, Dark Matter can no longer be acquired from the bazaar, and selling the ingredients needed to make it will result in making the Dark Energy item instead. Dark Energy does not need to be charged up, instead always dealing 50,000 damage to each enemy over a large radius.

Dark magic in material form. Functions as a transformational catalyst.

Dark Matter is a catalyst used in upgrading equipment, costing 840,000 gil to purchase in R&D Depot. It is also drops from the Shaolong Gui that spawn on Gran Pulse after completing Missions 56–62.

Dark Matter is a component used to obtain medium- to high-leveled equipment. It can be won at the chocobo races (Havoc Stakes) and sold for 5000 gil.

It can be obtained fairly commonly as levequest rewards, gathering or treasure chests, and is also sold by certain NPCs. Dark Matter Clusters can be obtained from certain gathering nodes, which are used to make repair kits for airships.

During the quest "A Relic Reborn (Stardust Rod)", Gerolt implies that dark matter is of meteoric origin.

Malboro can drop Dark Matter, which is needed to complete Mutsuki's quest, Hazardous Material. Completing it yields a Diamond Ring, and the task is available in Chapter 7, Free Time 1.

A mysterious black substance with no more form than mist. What's it for? Why, throwing at enemies, of course.

Similar to Final Fantasy XII, the Dark Matter deals damage to all enemies on the map and its power increases the more Knots of Rust the player has used. The Ranger can also use it with his Mirror Items ability to invert its effect and restore health to all allies.

Dark Matter is a Magic Artifact that adds Magic +5 to a character's skill, and a crafting material used for making the ultima weapon from the greatest weapon scroll obtained from an alchemist's parents after enough years.

Dark Matter is Magicite created through the Lilties' Alchemy ability when the player fails to create the Magicite. Dark Matter can be mixed again to create Materials through Alchemy. While Dark Matter cannot be carried around like other Magicite, it can be picked up and thrown at enemies to cast a random magic spell or inflict the Zap status with no damage dealt. The spells are either the non-damaging Zap effect (50% chance), Fire (15% chance), Blizzard (15% chance), Thunder (15% chance), Quake (2% chance), Meteor (2% chance), or Ultima (1% chance).

A strange substance made of pure darkness.

When the world is merged into the World of Dusk, several pieces of Dark Matter are created, both in the world and in mysterious Rifts scattered across the planet. The Warriors of Light and Darkness race to collect the pieces before the Avalonian Empire can reach them. Upon collecting every piece, the barrier surrounding Castle Avalon vanishes, allowing the Warriors to confront the empire directly.

This section about an item in Final Fantasy Record Keeper is empty or needs to be expanded. You can help the Final Fantasy Wiki by expanding it.

A pitch-black substance. An immense quantity of energy is stored within it, and as one theory holds, its origins might be traceable to a mysterious black crystal which suddenly appeared in the Farplane.

A jet-black material from the distant world of Gaia. In its world of origin, it can be worn as an accessory or used to attack. It is said that contained within it is an eidolon with the power to level entire towns, but this has yet to be verified

Dark matter is an enhancement material obtained by reaching the certain score milestones in the event Dark Visions - The Advent of Chaos. It can be used to exchange them with the Moogle Guard Captain in order to obtain the recipes for the Dark Ragnarok and the Dark Gambanteinn, and also to craft the upgraded versions of these weapons.

Dark Matter (FFIX) is a crafting material obtained during the Final Fantasy IX event, Silver Dragon. It is required to upgrade the Protect Ring to Protect Ring+.

A substance that does not reflect light and, therefore, cannot be directly observed. Its shape, however, can be discerned by the light it blocks behind it. It is contained in a celestial wine glass that has been tightly sealed.

In Bravely Default, Dark Matter is a material imbued with the power of dark and can be used for compounding. 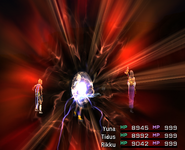 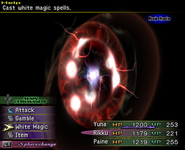 [view · edit · purge]Dark matter is a theoretical form of matter that has no detectable radiation emission, hence the name. Its existence is inferred from gravitational effects, and it is predicted to account for approximately 22% of the total mass/energy content in the universe (normal matter accounts for only 4%).

It seems probable that, like many fictional uses of dark matter, its mysterious nature is the only reason for the name being used in the games. The item in the games bears no other apparent similarities to the predicted properties of the real-world equivalent.