Boss
Dark Lord is one of the two main antagonists in Final Fantasy Adventure. He is the ruler of the Glaive Empire who seeks to gain eternal power from touching the Tree of Mana.

Dark Lord resides in Glaive Castle on Mt. Illusia. He captures and enslaves numerous people from the world below, including Sumo, forcing them to serve as gladiators, fighting monsters for his entertainment.

Dark Lord enlists the aid of his adviser, Julius, whom he raised from an orphaned infant. Julius tells him that the tree lies in a shrine atop Mt. Illusia's waterfall and that a mysterious girl can help him reach the shrine. Dark Lord has Julius capture the girl from Sumo while his pet bird, Garuda, recovers her pendant.

Before the battle with Dark Lord in the Japanese version, Sumo once again vows to avenge Willy. In the North American translation, Willy is never mentioned again after Sumo's escape, despite them having been friends.

Dark Lord is ultimately defeated in battle by Sumo. However, he is revealed to have a fake pendant in his possession while Julius has the real one and proceeds to use it for his own quest to get the power of Mana. It is likely that Julius betrayed Dark Lord by switching the pendants to fulfill his own plans, but the precise details are never revealed.

Dark Lord moves around very fast, attacks the player has fast, and hits hard as well. He has a good defense from the front.

The Dark Lord appears in the version available via the Final Fantasy Portal App. 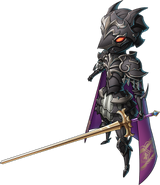 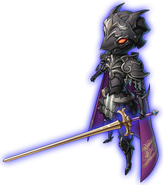 Glaive Lord.
Add a photo to this gallery 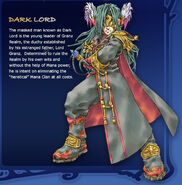 Adventures of Mana artwork.
Add a photo to this gallery

[view · edit · purge]Dark Lord is another name for the Devil, the personification of evil in certain religions. In fiction, Dark Lord is often used to refer to a powerful antagonist with evil henchmen.