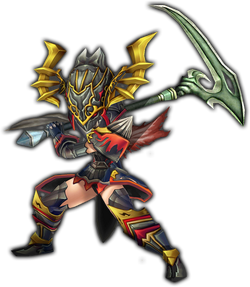 Dark Knights use powerful scythes to cause tremendous damage, making for a perfect heavy hitting attacker.

Dark Knight (暗黒騎士, Ankoku Kishi?) is one of the jobs available in Final Fantasy Explorers.

The Dark Knight is unlocked by defeating 500 enemies. It can be mastered by completing any 10 quests, then the 5★ quest "Mastery Trials: Dark Knight".

The Dark Knight is a powerful damage dealer. They can initially equip axes, scythes and swords; after mastery dual axes, dual swords, and spears can be equipped.

Dark Knights are proficient in all Axe Skills.