Relm: I couldn't miss the chance to practice my drawing!
This article is in need of a few pictures. Perhaps you can help by uploading a picture of Tiz as a Dark Knight. 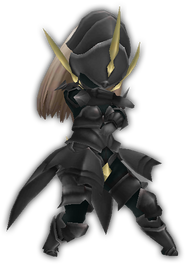 The Dark Knight is an asterisk that appears in Bravely Second: End Layer. It is obtained after defeating Alternis Dim.

The Dark Knight uses Dark Arts to deal heavy physical dark-elemental damage to targets, using their own HP as fuel. With their innate ability Adversity, they gain increased stats when taking damage.

The Dark Knight's specialty is Adversity. Its job command is Dark Arts.

Yew as a Dark Knight.

Edea as a Dark Knight.
Add a photo to this gallery

This gallery is incomplete and requires Tiz as a Dark Knight added. You can help the Final Fantasy Wiki by uploading images.