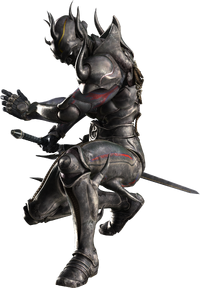 My anger, pain and sadness—shall be your loss.

The Dark Knight is characterized by wearing tight, sometimes enclosed, black armor and wielding a sword steeped in wicked powers. Their physical stats, with exception of Defense, are usually high, but their other stats depend on the game they appear in. The typical Dark Knight ability is Souleater, also known as Darkness, which allows them to sacrifice their HP to perform stronger attacks. Souleater is not exclusive to the Dark Knight class, however.

Dark Knights may also have abilities based on blood equipment, which allows them to absorb HP and MP from enemies. The Dark Knight is opposed by the Paladin, holy knights who protect allies and wield sacred powers. Unlike many classes, Dark Knights bear a signature weapon, the Deathbringer, which has a chance to kill certain enemies in a single blow.

Leon marks the first appearance of the Dark Knight within the series. He serves as the Emperor's right-hand man until the Emperor's defeat and subsequent revival, at which point he joins the party.

The Dark Knight is a job class obtained from the Water Crystal. They are trained to harness the negative energies that flow throughout the world. The dark blades they wield are effective against monsters that divide and multiply. In the original NES release, the Dark Knight can cast White Magic similar to a Paladin.

Cecil Harvey, the primary protagonist, serves as a Dark Knight until he becomes a Paladin on Mount Ordeals. Baron is also mentioned to have a battalion of Dark Knights in their army, but due to the intense training many Dark Knights fail to master the dark sword and lose their minds in the process. A reflection of Cecil's Dark Knight is fought as a boss. The King of Baron is also a Dark Knight.

As a Dark Knight, Cecil can use the Darkness ability to inflict damage to all enemies at the cost of some of his HP. In the 3D remake versions, Darkness doubles his attack for three turns at the cost of 10% of his maximum HP per attack.

Cecil's dark side is fought as a boss. Cecil is also seen as a Dark Knight in several flashbacks.

The Dark Knight dressphere can be obtained in Bevelle during Chapters 2, 3, and 5. The class uses skills that cause status effects, grant status immunity, and cause high damage by sacrificing HP. Their high strength is hampered by their low speed.

The Dark Knight job is awarded to the player by Zeid, after using the Chaosbringer sword to kill 100 monsters. In addition to their usual abilities, Dark Knights can also wield low-level Black Magic, but not nearly to the same extent as Red Mages and Scholars.

Lightning can acquire the Dark Knight garb based on the Dark Knight job by completing the sidequest "To Save the Sinless". Lightning must unravel the disturbing mystery surrounding a man named Ranulph and learn the true reason why pages from his journal are missing. The garb comes with two abilities, Darkness and Ashura. Both abilities consume Lightning's HP for powerful attacks. Darkness deals area damage, while Ashura focuses devastating power on a single target. The garb also contains the Soul of the Dark Knight, which slightly increases physical attack and magic resistance. 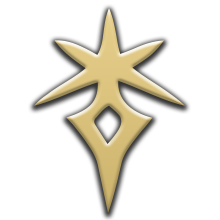 Dark Knight was introduced as a new job in the Final Fantasy XIV: Heavensward expansion. It is the third tank class and wield greatswords as their weapon of choice.

Dark Knight is a job in The War of the Lions version. It has abilities that focus on delivering damage to opponents using the darkness to drain their HP or MP, and also can attack sacrificing their own HP to deal more damage. It costs 6,900 JP to master.

Deathknight is an enemy job used by the undead Argath when the player fights him in Chapter 4. It is a stronger version of the Fell Knight job used by Gaffgarion.

Grissom, the leader of the Redwings, has a job named "Dark Knight", with a sprite and abilities as a Paladin and Blue Mage as secondary job.

The Black Knight is a character clad in all black armor that fights wildly with a large black bladed spear. The story tells that he was once a great warrior and hero before going mad and losing his memories. Later on, it is revealed his true name is Leon Esla, a reference to the Final Fantasy II Dark Knight.

Dark Fencer is one of the crowns. Dark Fencers can sacrifice their life force to deal large amounts of damage using the Darkside ability. They also have an ability to allows them to do higher damage when their HP is low, called Eye for an Eye, and a stronger version of Darkside that attacks multiple targets, called Darkerside, and a kamikaze attack, called Amok, that allows them to repeatedly use Darkside until they have one point of health left.

Alternis Dim is a Dark Knight, and the holder of the Dark Knight asterisk that grants the job to the player when obtained.

Dark Knight has numerous abilities revolving around dealing high damage at the cost of HP. They have several skills that let them sacrifice their HP, damage their party members, or inflict doom status on themselves in order to deal heavy damage to enemies or increase their own offense and defense. Other Dark Knight skills don't cost HP directly, but are only effective if the Dark Knight takes damage from enemies.

The Dark Knight is an asterisk obtained after defeating Alternis Dim. The Dark Knight uses Dark Arts to deal heavy physical dark-elemental damage to targets, using their own HP as fuel. With their innate ability Adversity, they gain increased stats when taking damage.

Dark Knights have access to the Draw Attacks ability, as well as access to the Dark Sword ability list. Dark Sword attacks include Darkness, which deals improved physical damage for 1 MP at the cost of 25% of the user's maximum HP, Onyx Wave, which deals heavy damage to all enemies at the cost of 33% of the user's maximum HP, Curse, which inflicts Curse and Sap status on one enemy, Last Resort, which greatly improves the user's stats but inflicts them with Doom, Final Thrust, which deals damage equal to the Dark Knight's maximum HP and is more accurate at low HP, and Ebony Slash, which deals more damage than Darkness and costs no health, but costs 28 MP.

As Dark Knights level up, they also gain access to Absorb HP, which heals the Dark Knight by 10% of the damage they deal with a basic attack, and Backliner, which allows them to deal full damage from the back row.

There is also an enemy called Dark Knight, unconnected to the job.

Parai gets an alternate costume based on the Dark Knight job from the "Phantom Beast Great Decisive Battle!" event. The costume can only be seen when Parai is equipped with the "Dark Knight Equipment" accessory. The accessory provides 25% boost to attack strength and 1,300 HP to max health.

Signet (Rank 8).
Add a photo to this gallery

Cecil appears as both a Dark Knight and a Paladin, able to shift forms when attacking. His Dark Knight form specializes in slow but powerful sword attacks infused with dark magic.

The Dark Knight is also a job that can be selected for a character in the player's party for Quick Battle, Friend Cards, or wireless matches. The Dark Knight job grants the character +5 ATK at a cost of -3 DEF, and is needed to unlock the Mystic Knight and Berserker jobs.

The Dark Knight is a job available after obtaining a level 5 Warrior and a level 10 Black Mage. The preferred weapons for the job are swords and scythes. The job specializes in both strength and intelligence abilities.

The Dark Knight appears as a character card.

A warrior who wields the powers of darkness, sacrificing his own life force to crush his enemies. The Dark Knight excels in an offensive role.

Dark Knight is a playable character who can be recruited as the First Time Reward for completing The Palamecia, Part 2 on Classic difficulty in the FF XIII realm of the core dungeons.

Dark Knight is a job unlocked by defeating 500 enemies. Dark Knight is a powerful damage dealer. They can initially equip axes, scythes and swords; after mastery dual axes, dual swords, and spears can be equipped.

Luneth as a Dark Knight.

Ingus as a Dark Knight.

Refia as a Dark Knight.

Arc as a Dark Knight.

Artwork from Final Fantasy Explorers.
Add a photo to this gallery

Dark Knight from Final Fantasy III.
Add a photo to this gallery

The Dark Knight has several skills that sacrifice Chocobo's HP to damage enemies. It is unlocked by defeating Croma Shade and Croma on the thirtieth floor of Guardian of the Light.

In the Zodiac versions of Final Fantasy XII, an Uhlan (ウーラン, Uuran?) is a heavy physical attacker represented by the Zodiac sign Taurus. They are differentiated from Dark Knights in that they wield poles rather than greatswords or scythes, but still use heavy armor.

In the arcade-based card game Lord of Vermilion there are two cards representing the Dark Knight job.

In the sequel Lord of Vermilion II there is another appearance of the Dark Knight card.

Knights of the Crystals[edit | edit source]

The Dark Knight appears on a bronze card.

Dark Knight (female).
Add a photo to this gallery

In the overseas version of the game, the optional boss Culex introduces himself as a Dark Knight of Vanda and a resident of another world that was interested in invading Mario's world, but Mario's world is uninhabitable for Culex and his kind. Before he departs and closes the portal, Culex asks for a duel with the party.

As a crossover collaboration with Final Fantasy Airborne Brigade, the character Albert Wesker is a Dark Knight. This is likely in correlation to Albert's juxtaposition to Chris Redfield as an agent of Umbrella Corporation, and his constant and successful use of the experimental and dangerous super viruses created by Umbrella to empower him; one such virus that further draws simile to the "dark power" the Dark Knight wields is that of his most potent and signature creation of the Ouroboros Virus.

Artwork of the Dark Knight Leon in Final Fantasy II.

Another Dark Knight in Lord of Vermilion, clad in heavy armor.

Agnès and Tiz as Dark Knights in Bravely Default.

Edea as a Dark Knight in Bravely Default.

Ringabel as a Dark Knight in Bravely Default.

Magnolia as a Dark Knight in Bravely Second: End Layer.