Dark Knife (ダークナイフ, Daakunaifu?) is a recurring weapon in the series.

Dark Knife is the third strongest dagger in the 3D versions, only usable by the Onion Knight, Thief, and Ninja classes. It provides 93 Attack and +5 Agility, and can be bought for 30,000 gil on the Invincible.

Darksteel Knife is a dagger that provides 19 damage and 195 delay. It can be equipped by level 53 Warrior, Thief, Paladin, Dark Knight, Bard, Ranger, Samurai, Ninja, Dragoon, Corsair, Puppetmaster, and Dancer. It can only be obtained through synthesis.

Dark Knife is a dagger that provides 42 ATK and is Dark-elemental. It can be obtained during the Final Fantasy III event, Doga's Grotto. 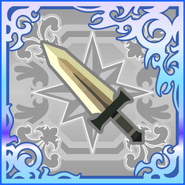 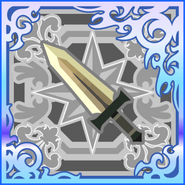