To take his life... I will kill Cecil with my own hands!

Dark Kain is a character from Final Fantasy IV's continuity. He is the incarnation of the darkness in Kain Highwind's heart, fueled by Kain's hatred and jealousy towards Cecil and his unrequited love of Rosa. He first appears in the Lunar Ruins in Kain's Trial in Final Fantasy IV Advance, acting as the trial's main antagonist.

He returns in Final Fantasy IV: The After Years as an antagonist, working with the Mysterious Girl to collect the Crystals while the heroes believe him to be the real Kain. For a short time, he is known as Kain? until the true Kain reveals himself and exposes Dark Kain as an imposter. Dark Kain is temporarily playable during the game. 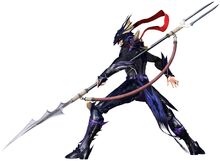 As Kain's darkness incarnate, Dark Kain appears identical and is often mistaken for him. He initially appears in Kain's Lunar Trial as a cloaked, shadowy figure, later casting his cloak off to reveal a set of armor similar to Kain's but colored purple. In his artwork for The After Years Kain has a pale complexion with dark, scaled armor and a long red sash fluttering from the back of his helmet. His CG render for Final Fantasy IV: The Complete Collection is mostly identical to Kain's render for the 3D release of Final Fantasy IV.

Being Kain's dark side, he hates Cecil and his mission in The After Years is to kill him and seize Rosa for himself. He claims he is the "true" Kain and resents his other self, though he does not kill Kain after overpowering him. While working with the Mysterious Girl, Dark Kain is initially curious about her identity and motives, but eventually tells her he does not care what she does with the Crystals as long as he can fight Cecil in exchange for them.

Despite this, Dark Kain has several moments of compassion. He saves Porom's party from monsters, and tells the Baron guards accompanying him to Damcyan that they should value their lives, even though they are mind-controlled. Like Kain, he remains loyal to Baron as a country, claiming it was always his homeland. In his fight against Rosa and Edward, Dark Kain refuses to harm Rosa, and any attempt to attack her will miss, indicating that he retains Kain's love for her. This may mean that he is only the embodiment of Kain's hatred and jealousy for Cecil, and while it takes precedence above acts of kindness, he is otherwise a good man. When on his way to duel Cecil he exclaims "Freedom is finally upon me! Yes, Cecil... I'll finally be free from you!", implying his drive to kill Cecil may not be something he can help.

Dark Kain appears during Kain's trial in the Lunar Ruins, taking place in a parallel universe of Baron. During the night a black cloaked figure has attacked people with a lance, evading the authorities by leaping across rooftops, and leaving a blood-soaked lance in Kain's room at the inn as the only clue. This serves to incriminate Kain after repeated murders, and he is arrested. Kain apprehends a guard as the perpetrator, but returns to his bedchamber to find the lance once again. Dark Kain tells him telepathically that it won't end until Cecil is dead.

Kain realizes Cecil is in danger, and follows him into the Devil's Road where they are teleported to a mirrored chamber. Kain finds Cecil unconscious and Rosa bound, while Dark Kain emerges from the mirrors, declaring himself the embodiment of Kain's dark desires, and that the trial's world was one he created. Dark Kain invites him to kill Cecil with the bloodied lance and claim Rosa. If the player accepts, Kain absorbs his dark side and kills Cecil, failing his trial.

If refused, Dark Kain takes the lance and uncloaks himself to fight Kain. During the battle Dark Kain transforms into Lunar Bahamut, but is defeated. For his victory, Kain receives the bloodstained lance as Abel's Lance, along with the Dragoon Gloves. Kain exits the trial only to find no time has passed outside; Cecil is waiting at the entrance, unaware Kain even entered. Kain chooses to remain silent about what happened within.

A former dragoon of Baron. He secluded himself atop Mt. Ordeals in order to overcome his weaknesses. His whereabouts have since been unknown.

Years later Kain trained on Mount Ordeals and faced Dark Kain in combat with Dark Kain emerging victorious and left to wander the world freely. Kain abandoned his identity to find him. When Porom is sent to retrieve Kain from the mountain for assistance, Dark Kain saves her party from monsters and accompanies them when they mistake him for the real Kain. After arriving at Mysidia, the city is under attack from monster hordes commanded by the Mysterious Girl. Dark Kain betrays Porom by stealing the Water Crystal and offering it to the girl.

Dark Kain heads to Baron Castle through the Devil's Road with the Mysterious Girl where she offers him a duel with Cecil in exchange for the Crystals. Dark Kain accepts and commands numerous Baron soldiers on an airship for his task. At Fabul, he launches an invasion on the castle, engaging Yang and Ursula in the crystal room. After getting by them, he steals the Crystal.

His next destination is Damcyan where the Second Battle of Damcyan ensues. Edward unleashes a horde of Bombs that kill Dark Kain's men, and despite Rosa and Edward's attempts to defend the Crystal, Dark Kain defeats Edward and captures both Rosa and the Crystal. Dark Kain returns to Baron with the intention of killing Cecil before Rosa, but is stopped in the throne room's antechamber by Ceodore, Cid, Edward, and the true Kain who has been assisting Ceodore under the alias of the "Hooded Man."

Kain reveals that the one committing these atrocities was his dark side. The two duel with Kain emerging triumphant. Kain has learned he cannot repress his past and must accept his darkness to conquer it and although the defeated Dark Kain protests, Kain consoles him that he will not die but instead will become one with Kain. Kluya's spirit fashions Kain into a Holy Dragoon in recognition of his trials.

Dark Kain is fought in Kain's Lunar Trial in the Game Boy Advance and PSP releases of Final Fantasy IV, but he is not a true enemy; he has no bestiary entry, counters all damage with an attack, and transforms into Lunar Bahamut after a few turns. He can be defeated with a Tornado from Abel's Lance, but this triggers a glitch where the player does not receive the Grimoire LB for defeating Lunar Bahamut, thus preventing them from accessing Kain's Trial on subsequent trips through the ruins (completing a trial earns the player a summon Grimoire for the boss defeated and the trial cannot be entered again until that Grimoire is used). This, however, was fixed in the European Game Boy Advance version as well as in all PSP versions, whereby the player does receive the Grimoire LB for defeating Dark Kain before he transforms into Lunar Bahamut.

Dark Kain is a guest character and relatively strong one. He is available after the player completes Porom's Tale for her Challenge Dungeon, and is a solo playable character in some sequences during Kain's Tale, where the story's perspective shifts between Dark Kain and the real Kain.

Dark Kain comes with the Jump ability. Although He has some MP, he has no skills or Band abilities to expend it on.

Dark Kain comes equipped with the Wind Spear and a full set of mythril equipment. He can equip the Dark Sword, the Shadowblade, and the Deathbringer if hacked into the game. During Kain's Tale, the player can reequip Dark Kain with some sub-par equipment obtained earlier in order to allocate the Wind Spear for Ceodore and the mythril set for the real Kain.

Dark Kain is fought as a boss in The After Years, facing Kain in a showdown at Baron Castle.

Kain is purchasable as downloadable content, as one of the monsters that can be summoned by Mira. He appears wearing Dark Kain's attire.

An alternate costume for Kain Highwind, "Noir Dragoon," is directly based on Dark Kain. 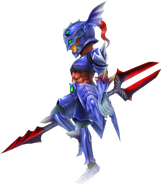 Kain in Crystal Chronicles: My Life as a Darklord.

Artwork of the cast, featuring Dark Kain and the Hooded Man. 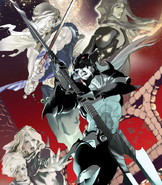 Kain dueling with his dark side. Artwork by Akira Oguro.

Dark Kain with Rosa in Complete Collection's opening FMV for The After Years.

Dark Kain attacking in Complete Collection's opening FMV for The After Years.

Dark Kain in The After Years (iOS).

[view · edit · purge]Cain was the brother of Abel in the Tanakh/Old Testament book of Genesis. Cain became the first murderer by killing his brother out of jealousy stemming from God choosing Abel's gift over that of Cain.