Dark Ixion is an optional boss in the International, PAL and the HD Remaster versions of Final Fantasy X. Available after viewing the arrival cutscene of Calm Lands, he is encountered twice, the first time by talking to a Yevon soldier on the northern section of the Thunder Plains, and after that, by finding him after a lightning strike.

In the first battle, Dark Ixion counters every attack, and inflicts Sleep (by 99 turns), Armor Break, and Mental Break. His non-elemental Thundaja spell may be dangerous, dealing damage as well as strong Delay. In the first battle, Dark Ixion uses Aerospark when his Overdrive is full, which removes several beneficial status effects: Auto-Life, Haste, NulAll, Protect, Reflect, Regen, and Shell.

During the second battle, Dark Ixion can no longer counter, and his attacks now inflict Confuse instead of Sleep in addition to Armor Break and Mental Break as before. He uses his normal Overdrive, but Thor's Hammer is quite weak—17,100 to 19,308 damage—although it inflicts Full Break and its damage cannot be reduced by anything but another aeon's Shield.

Evade & Counter allows one to evade his physical attack. Out of all the Original Creations, Dark Aeons, and Penance combined, the only evadable attacks are Dark Ixion's physical attacks. Dark Ixion is the most accurate enemy in the game, making a combined total of 290 Evasion + Luck required to ensure dodging any evadable attack in the game; it does not matter whether this is 255 Evasion and 35 Luck, or 35 Evasion and 255 Luck, or anywhere in-between.

Dark Ixion is unique in that the party can escape from the battle with Flee. This can be done in both encounters.

As in the other Dark Aeon battles, it is best to use Auto-Life or call an aeon when the enemy's Overdrive gauge is full, although the Full Break effect from Ixion's Overdrive can be cured with Dispel. He is especially weak to Armor Break.

Dark Ixion has a low HP stat, so he can be defeated quickly by using the strongest Overdrives several times. The party should have extremely high Agility and Luck. Very high Strength, Defense, and Magic Defense are also useful.

If the player has a relatively weak party that would die after one hit of any of Dark Ixion's moves, two characters can be equipped with Auto-Phoenix. If the player brings out an aeon when Dark Ixion's Overdrive gauge is full in the second battle, they will be fine as Dark Ixion has no other attack that attacks more than one opponent. Dark Ixion can be taken down by simply using strong physical attacks, although Dark Ixion will counter. The second battle is easier as Ixion will no longer counterattack, and most of the original strategy applies, but his Thor's Hammer can slay the party.

In both times he appears, he can be destroyed instantly by Yojimbo's Zanmato, as with any other enemy.

Dark Ixion can be used to farm AP quickly by using a similar method for AP farming Don Tonberry. The player should set up the party with Overdrive → AP, and if possible Triple AP and Triple Overdrive, and have all characters with the Overdrive mode Comrade.

It is recommended that this be done in the first battle, as Dark Ixion has no attacks that damage the entire party at once. During battle the party should have First Strike on a weapon and Auto-Phoenix on an armor. When attacked, Dark Ixion will counter for heavy damage. Thundaja will likely deal 99999 damage, assuming the party has been inflicted with Mental Break. After several turns the player should flee.

If the player has already defeated the first form of Dark Ixion, this trick can be modified for the second form by fleeing when Dark Ixion's Overdrive gauge is full; however, this is less efficient. 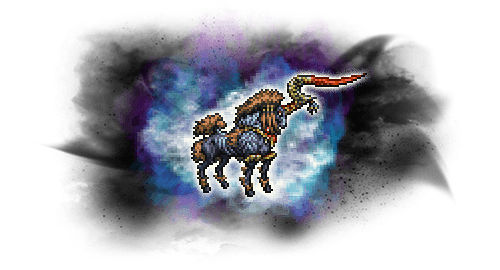 Thor's Hammer
Add a photo to this gallery

Retrieved from "https://finalfantasy.fandom.com/wiki/Dark_Ixion_(Final_Fantasy_X)?oldid=3281761"
Community content is available under CC-BY-SA unless otherwise noted.