The Dark Elf is a character and boss in Final Fantasy IV. He has stolen a Crystal from Troia.

The Dark Elf stole the Crystal from Troia, and took it into his lair in the Lodestone Cavern. Cecil's party decides to return it, so they can trade it to Golbez. The cavern has a powerful magnetic field inside—meaning no metal equipment can be used.

The party make it to the cave, but the power of the Dark Elf is monstrous. Edward uses his harp through the Whisperweed to disband the magnetic field and give the party a chance to equip their weapons and fight back.

The spirit of the Dark Elf still resides in the Crystal Chamber of the Lodestone Cavern. It attacks Palom and Leonora when they enter the chamber to escape the Mysterious Girl. They engage in a fight. When he transforms into a dragon, he resists their magic. The Mysterious Girl then enters the room and destroys him with the Eidolon, Shiva.

The Dark Elf attacks and easily defeats the party in Final Fantasy IV, but Edward's harp allows them to fight back and kill him. When he is defeated, he resurrects himself as the Dark Dragon.

The Dark Elf returns in The After Years, and is defeated by the Mysterious Girl after transforming into the Dark Dragon.

The Dark Elf had appeared as an event boss in the now defunct mobile game, Final Fantasy Airborne Brigade. Due to the simplistic nature of the game's combat, the Dark Elf would cycle through several attack phases until it the turn count ended or was defeated. 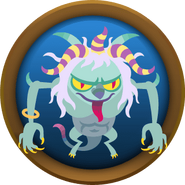 In the SNES version, the Dark Elf has an odd speech pattern that causes him to speak in a repetitive manner and shout all his dialogue. The Advance version has slightly less strange mannerisms, but still tends to emphasize random parts of sentences (e.g. "I comMEND you for your efFORts"). By the Nintendo DS version, the Dark Elf speaks in a normal fashion.

[view · edit · purge]Dark elves originate from Norse mythology, but have since become a fantasy trope. In Norse mythology dark elves are one of two contrasting types of elves; dark elves dwell within the earth and are most swarthy. Moriquendi is a fictional race of elves in J. R. R. Tolkien's legendarium. Drow, or dark elves, is a fictional subrace of elves in Dungeons & Dragons and novels by R. A. Salvatore set in the Dungeons & Dragons universe. Dark elves also exist in the Warhammer fantasy series, and Dunmer is a type of dark elf in the Elder Scrolls fantasy series. Dark Elves also appear as one of the Myrran races in the strategy/fantasy game Master of Magic.