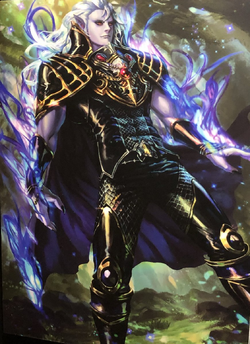 The Dark Elf (ダークエルフ, Dāku Erufu?), also known as Elfdrit (エルダリート, Erudarīto?) is an antagonist in Final Fantasy Brave Exvius and a member of Hess' Eight Sages. A mysterious creature with deadly magical powers, he makes his debut during the Gronoa chapter.

The Dark Elf is a humanoid creature with ghastly grey skin and equally grey long hair that reaches past his shoulders. He a purple mantle with several yellow linings and, a long, somewhat ragged purplish cape. He wears darker upper gears and pants. He uses a pair of boots with a purple upper half and a black lower half. The feet section is white. His arms are unsleeved and posses a pair of purple bracers. Both the bracers and the boots are also adorned with the same yellow linings. He walks in a curved, rather zombie-like manner.

Not much is known about the Dark Elf's previous personality. However Dark Fina defines him as always being unpredictable. At present and as a result of prolonged time sealed in Crystal, the side-effects of his hibernation have severely corroded his mind, making him much more volatile, violent and uncontrollable. Losing and and all possible ability for logical reasoning, the Dark Elf now moves purely through destructive urges, enjoying his "freedom" and believing that to feel "completely free" he must continue to destroy his surroundings. In this state he walks and behaves in a rather bestial manner and has completely forsaking any concern for life, including his own. All this traits along with his monstrously powerful magic make him extremely dangerous.

The Dark Elf was a creature from Paladia. When Hess declared independence, Aldore rejected this and a civil war torn the world apart. The Dark Elf was eventually recruited by Hess to serve as one of the faction's Eight Sages, becoming one of its main lieutenants in opposition to the Sworn Eight of Paladia.

When the original Veritas of the Dark decided to enact a plan to seal the Sages in Crystals and then use their leverage to force negotiations between the factions to let Hess become independent, the Dark Elf was sealed into what would become the Water Crystal. The sealing was successful and the Dark Elf was imprisoned as were his comrades as well.

However the Sworn Eight were betrayed by Aldore causing the giant battlefield landmass where they stood upon along with the Crystals they held and several soldiers to be transported to the world of Lapis. The Dark Elf would then be imprisoned for 700 years.

After Veritas of the Waters destroyed the Water Crystal in Olderion, the Dark Elf was freed, although for unknown reasons he appeared in Gronoa. The long time imprisoned in the Crystal had unpredictable side-effects that changed the creature, turning him insane, murderous and destroying everything around him, enjoying his "freedom" and desiring more of it by causing further destruction.

In Underworld Gaberada, Dark Fina senses the Dark Elf and warns the rest of the party of his erratic nature. Knowing he may approach the Dark Crystal, the party races to prevent the Sage from destroying the last Crystal. Sakura begins to wonder how the Dark Elf may have changed after his imprisonment.

The Party manages to find and witness the Dark Elf opening a path for himself with his destructive magic and continue to race against him, with Sakura's fears confirmed that the Dark Elf has changed for the worse as a result of being sealed for so long.

The party manage to face the creature in Desolate Landing. Although they believed he was defeated the Dark Elf unleashes the magic he was storing and blasts the party, resuming his quest for the Crystal. Veritas of the Light contemplates the scene and considers herself lucky to have this chance to kill them and attempts to kill Rain first. Sakura begs her sister to kill her instead and Light desists not feeling any thrill from killing weakened opponents and going after the Dark Elf, not wanting to let him destroy the Crystal to have the pleasure to do so herself. Sakura voices her worries knowing she will die but Light reaffirms that won't happen as she already "died" twice, once when Aldore betrayed her and again when Sakura left her side.

Light catches up to the Dark Elf and duels him but is defeated, the Dark Elf once more restarting his rampage. The party finds Light, injured and she begs Sakura to kill her. Her sister refuses to do such a thing and Light in turn, provokes Rain into killing her by revealing she killed her mother Sophia. Rain is shocked and Light continues to urge him to kill her by stabbing her in the heart where her immortality won't work. Rain however decides against revenge and is grateful to Light for the truth now relieved that his father did not truly kill his mother as he cryptically implied once. Light is puzzled and further insists that Rain kills her but he refuses, believing they should settle the score in a more adequate setting. He continues to elaborate that the first time he saw the Sworn Six, he believed them to be murderers but as he got to know them, he saw their human traits. Rain leaves stating he won't fight them out of anger, as he understands their motives but does not approve their actions. Light threatens to blast him from the back and Rain tells her she's free to do so, mirroring the words Raegen once told her. Light is left unable to act muttering to herself that she could not do such a thing to him or to Raegen.

The Dark Elf is faced twice as a boss during the Gronoa chapter. In both instances, he has 200,000 HP and his stats are more or less the same. The Dark Elf can attack up to thrice per turn and uses mostly ga-tier spells to assault the party repeatedly with powerful magic. He also uses regular physical attacks and when weakened buffs his ATK and MAG, he ends his turn after buffing himself.