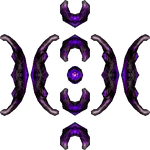 Dark Elemental (ダークエレメント, Dākueremento?), also known as Dark Element, is a recurring element in the Final Fantasy series. It is an Elemental which does not have any specific elemental affinity.

Dark Elemental is fought in the Dawn of Souls and succeeding releases, only found in Earthgift Shrine, Hellfire Chasm, Lifespring Grotto and Whisperwind Cove. It is found protecting several treasure chests and other tiles.

Dark Elemental is fought only in the Advance and succeeding releases. It is located in the Sealed Temple's Ruined Shrine. Dark Elemental notably has four different elemental affinities, which dictate its weaknesses, and whether it will use Firaga, Blizzaga, Thundaga or Aeroga.

Dark Element is fought in the Cavern of the Stolen Fayth. It may cast Reflect on itself, making casting Blk Magic spells detrimental. However, if Blk Magic spells hit, then they can easily defeat it, meaning that it is useful to Dispel it. Due to its tough defense against physical attacks, Armor Break should be used.

Dark Elemental is fought in the Farplane and Via Infinito Floors 61 - 64. It has relatively low HP, but can deal high magical and physical damage to the party.

Dark Elemental is a member of the Elemental spirit pact, and is fought as a regular and a notorious monster.

Dark Elemental (闇のエレメント, Yami-no-Eremento?) is fought in the Necrohol of Nabudis's Hall of the Ivory Covenant and Cloister of Distant Song. It has a low spawn chance of only 20%, making it a rare encounter. It is docile unless attacked or unless Magick is used nearby.

Dark Elemental is fought as a boss in the Undercity and as a normal enemy in the City Walls.

Elemental Dark is fought in the Library, Graveyard, Tower. It uses one of the three primary magic attacks to attack the party.

Dark Elemental is based on its Final Fantasy X appearance.

Enemies
Retrieved from "https://finalfantasy.fandom.com/wiki/Dark_Elemental?oldid=3238517"
Community content is available under CC-BY-SA unless otherwise noted.