Template:Enemy Dark Element is an enemy from Final Fantasy X found in the Cavern of the Stolen Fayth.

It has no elemental weaknesses, and may cast Reflect on itself as its first action, but sometimes casts Bio, Osmose, or Drain as its first action instead. Although it has low HP compared with other denizens of the cavern, it has high Defense; among Element-type enemies, no other has higher Defense, save only the Black Element from the Omega Ruins—not even the Nega Elemental in the Monster Arena.

Blk Magic spells no higher than Fira can kill it in one shot. The player should Dispel the Reflect status if need be. The lowest Black Magic Spells at less than 55 Magic, and Lancet Drain at up to higher levels of Magic, can also be used to aid in capturing it. Armor Break should be used to use physical attacks. 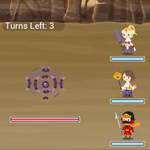 Retrieved from "https://finalfantasy.fandom.com/wiki/Dark_Element?oldid=2725246"
Community content is available under CC-BY-SA unless otherwise noted.