Dark Behemoth (ダークベヒーモス, Dāku Behīmosu?) is a recurring enemy in the series. It is usually the most powerful of the Behemoth class of enemies.

Dark Behemoth is an enemy fought at Arubboth and the Arcane Labyrinth. It fights using only a very powerful physical attack, so Blink and Protect are key spells to use in defending against it, while magic attacks work well due to its low Magic Defense.

Dark Behemoth is an enemy fought at Dragons' Den. It starts the battle by casting Mighty Guard, then attacks with powerful physical attacks and Heave, and when defeated, will either cast Meteor or Ultima.

Dark Behemoth is the strongest of the Behemoth family, having very high HP and, with the help of an unit with Beastmaster, can use the powerful Almagest ability. They are unable to use the Gigaflare or Twister spells that earlier Behemoths are capable of using.

This section about an enemy in Final Fantasy Tactics is empty or needs to be expanded. You can help the Final Fantasy Wiki by expanding it.

Dark Behemoth are a type of Mirage from the Behemoth group. They can be switched to a Behemoth board or to a Kuza Beast board.

Dark Behemoth was made available as DLC and was later released in the standalone Maxima version. The can be found in the Coliseum and become imprismable by using physical attacks. 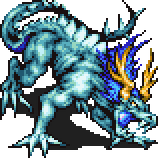 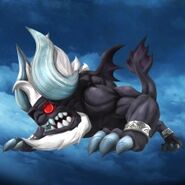 This gallery is incomplete and requires Final Fantasy Crystal Chronicles: The Crystal Bearers and World of Final Fantasy added. You can help the Final Fantasy Wiki by uploading images.
Enemies
Community content is available under CC-BY-SA unless otherwise noted.
Advertisement