Whenever you think you're right, you're wrong. And that's a big mistake.

Darill, as quoted by Setzer

Darill, known as Daryl in the SNES translation, is a non-player character from Final Fantasy VI. She was Setzer's closest friend and a rival and romantic partner, until she perished in an airship crash.

Darill has long blonde hair and green eyes. She wears a green top and skirt with boots and a red longcoat with sleeves. She bears a resemblance to Celes.

Darill is adventurous and courageous, dreaming of being famous for her feats of flight and not backing down when warned of the dangers. Setzer described her as "the world could turn inside-out and she wouldn't even flinch". She acts flirtatiously with Setzer and playfully goads him. Darill has a poetic side, describing her desire to fly higher than anyone before and see the stars up close.

Darill owned the Falcon, an advanced airship model. She and Setzer dreamed of having the world's fastest airship, but Darill was more extreme in her ambition and continuously upgraded the Falcon and pushed it to the limits of its performance. As she prepared for another test flight Darill told Setzer she wanted him to have the Falcon if something happened to her, but Setzer laughed that if he took the Falcon from Darill, it would be because he beat her in a race with his own airship, the Blackjack. Darill accepted the challenge and the two raced around the world. Darill beat Setzer and kept going, claiming she would break all previous records and come closer to the stars than anyone had before.

That night Setzer waited on a hill for Darill to return but she never came back. A year later, Setzer found the wreck of the Falcon in a distant valley; Darill had perished in an airship crash. Darill was laid to rest in a tomb south-west of Kohlingen, and Setzer restored the Falcon and sealed it in storage in the tomb, unwilling to take possession of it. The loss of Darill made Setzer a broken man who gave up on his dreams and sank into his gambling.

After the cataclysm that created the World of Ruin, Celes convinced Setzer to help her and her allies restore the world and defeat Kefka. A reinvigorated Setzer took the party to Darill's Tomb to raise the Falcon. Along the way Setzer reminisced about Darill and told the party about her. Setzer activated the Falcon and Darill's ship took to the skies as a new symbol of hope for the party.

In the Dawn of Souls, 20th Anniversary and iOS remakes of the original Final Fantasy, Daryl is one of the automatic names the player can choose for the Thief job.

Darill may have been inspired by the real-life pilot Amelia Earhart, a female pilot who set records in her time before mysteriously vanishing during an attempt to circumnavigate the globe in 1937. 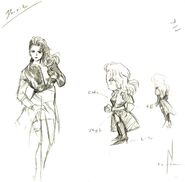