A beautiful singer has appeared to hold a concert in hopes of spreading love and peace throughout the world of Lapis with her songs.

However, a resentful spirit who lost her wonderful voice becomes jealous of the shining artist and decides to ruin her performance. As countless monsters start appearing and attacking the audience without warning, disruption and distress overcome what was meant as an entertaining event.

Now it is up to Rain and his friends to help the singer achieve her goals by vanquishing these foes.

Durind the event, players were to obtain Dangerous Ariana unit by clearing the first stage and farming exclusive materials to awaken her to 6★ Rarity. To do so, and to craft her exclusive equipment, the player had to defeat monsters inside the dungeon to obtain 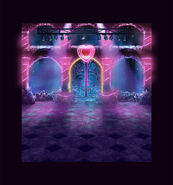