Why, hello there! I'm a dancer! Watch me prance!

The dancing girl is a recurring non-player character in the Final Fantasy series. The dancing girls are, except for rare instances, nameless, and serve purely as entertainment.

Arylon is one of few dancing girls to have been named. Her name appears only in the North American release on the NES. Unlike dancing girls in subsequent games, she does not dance for the party, but instead provides useful information to the Warriors of Light to aid them in their quest to restore the crystals.

Three dancing girls are found across the Floating Continent. This is the first game in the series where the dancing girl will dance for the player's entertainment, which bears no impact on the story. The dancing girl in Ur makes an appearance during the ending sequence where she tries to kiss Ingus for saving the world, but is stopped by Princess Sara Altney.

This dancing girl appears in several different locations and offers to dance for the party. In the 3D remake versions, the dancing girl's appearance was changed to feature her with pink hair and a yellow ribbon.

In the original Japanese SNES release, she removes her red dress on screen to reveal a bikini underneath before dancing and getting dressed again. The segment of her undressing was censored out of the North American and Easy Type releases, where she simply wears a yellow dress. It was restored in the PlayStation release, but censored again in the Game Boy Advance and PlayStation Portable versions for North America and Europe. Her dress is always red in the Game Boy Advance version, and in the Japanese PlayStation Portable release, she wears a red one-piece swimsuit instead of a bikini.

Though not censored in the 3D versions, the dress removal is replaced with a screen transition. A dancing girl can be seen briefly in the summon sequence when Rydia summons Bomb, and a Dancer can be fought within the Developer's Office.

The dancing girl appears in the debug room in the North American and Australian Final Fantasy IV Advance version.

Dancing girls appear in the Clubhouse at the end of the Developer's Office. Giving Miu-P either a Dry Ether, Remedy or Elixir will result in a "special" reward. The dancing is roughly the same dancing girl scene from the members-only section of Troia's King's Bounty Pub.

In Palom's Tale, Troia features many dancing girls. The player needs to purchase the Member's Writ for 10,000 gil. Five dancing girls will turn out to be five old women who will dance for Palom for a comical scene. Afterward, Palom will have a single digit HP. Going into their dressing room, the player will find an old woman selling the Member's Card for 50,000 gil which allows access to the Queen's Bounty Pub.

After speaking to the man at the southeast corner of the King's Bounty Pub and showing him the Member's Card, he'll open the path to the Queen's Bounty Pub that will feature nine dancing girls who will dance for Leonora, embarrassing her. There are two dressing rooms: the dancing girls on the right side sell female-exclusive equipment and the one on the left side sells the VIP Card that will allow access to The Emperor. If this card is shown to the man on the right counter, he'll open up the corridor.

Twelve dancing girls will dance for both Palom and Leonora in The Emperor and spell out Palom's name by positioning themselves across the screen in the five letters. The dancing girls can be found in the two dressing room on both sides after their dance.

In the Developer's Office of Final Fantasy IV, Yuno Lee, who is dressed like a White Mage, asks the player if they want to see her dance, but refuses to do so because she doesn't do that sort of thing.

There are three dancing girls in the pub in Tule. When Bartz speaks to one of them on the stage, she'll tell him to sit at the stool near the stage and face in their direction and they'll dance for him. The player must request a dance to get to the piano past the dancers to upgrade Bartz's piano level.

A dancing girl in Jachol invites various NPCs from the crowd to dance with her, and ends with an invitation that breaks the fourth wall: "And you on the other side of the screen, let's dance!"

The dancing girls do not dance for the player. The first dancing girl appears in Nikeah, when spoken to with Cyan in the party, she'll flirt with him and trigger a humorous scene. Two of them also work at the Auction House in Jidoor.

During the occupation of Albrook by the Gestahlian Empire, there are many dancing girls in the local pub. Two dancing girls dance on the stage entertaining the imperial soldiers while the others drink with them or serve them drinks. In the World of Ruin, many of these dancing girls are scattered in numerous towns across the ruined world.

Miqo'te dancers are found in various places around Eorzea, including the city of Ul'dah, Vesper Bay, and in Costa del Sol, La Noscea.

In one of the Arcanist class quests, K'lyhia disguises herself as a dancing girl in order to lure out the pirate captain Doesmaga Poisonheart.

In Final Fantasy XIV: Shadowbringers, there is a club in Eulmore where several dancing girls are performing.

K'lyhia as a dancing girl.

A dancing miqo'te in Vesper Bay.

A dancing mystel girl in Eulmore.

A pole dancer in Eulmore.

A dancing miqo'te during the 2019 edition of Moonfire Faire event.

In all the versions of Final Fantasy IV, the music played when the dancing girl dances in Baron and Kaipo is an arrangement of "Sabre Dance", originally composed by Aram Khachaturian in 1942 for the ballet Gayane.

In Final Fantasy V, the music played is an arrangement of the aria L'amour est un oiseau rebelle (commonly known as Habanera), originally composed by Georges Bizet in 1875 for the opera "Carmen". In the opera, the piece is meant to introduce the titular character. 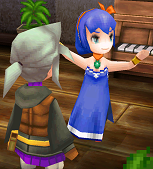 Luneth and the Dancing Girl in Final Fantasy III (2014 mobile/Steam). 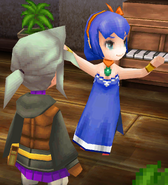 Luneth and the Dancing Girl in Final Fantasy III (PC).

Dancing Girl's in her bikini in Final Fantasy IV (SNES).

Dancing Girl's in her bikini in Final Fantasy IV (GBA). 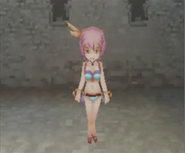 The Dancing Girl with the Bomb summoned in Final Fantasy IV (DS).

Dancing Girl in Final Fantasy IV: The After Years.