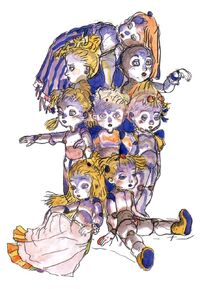 "Dancing Calbrena" was arranged by Kenichiro Fukui for the 3D release. It was released as the twelfth track of the second disc of the Final Fantasy IV Original Soundtrack.

"Dancing Calcabrina" plays in the boss fight against Calcabrina, the last boss of

The Antitower. It is the 3rd track of The Far Edge of Fate: Final Fantasy XIV Original Soundtrack.