Don't forget to have a little fun.

Dancer (踊り子, Odoriko?), sometimes abbreviated as DNC (踊, Odori?, lit. Dance), is a job that appears in various games in the series.

Dancers are often characterized as female, and wearing revealing attire. Dancers have been present as non-player characters in several early Final Fantasy games (known as dancing girls), and are usually shown in pubs. Dancers most often equip daggers, such as the Dancing Dagger, which is usually associated with the Dancer class. Their ability, Dance, performs one of several actions chosen at random, and their stats are some of the lowest of all classes. Some Dancers are capable of White Magic.

The Dancer is a class obtained from an Earth Crystal shard. The Dancer uses its various dancing skills to affect the enemy party in different ways.

Mog is a combination Dancer and Geomancer. Mog's Dances are based on the terrain and perform various random attacks depending on which Dance he uses. Mog learns new Dances by fighting on new terrain, and when using a dance that belongs to a different terrain than the one currently in use, he has a chance of failing.

The Songstress dressphere acts as a combination of Dancer and Bard. The Songstress's dances inflict status ailments and debuffs on enemies along with positive status effects on the party, while singing grants the same party buffs. Two specific dances must each be found as treasures.

Lenne is a non-playable songstress, but she doesn't participate in any battle to show her abilities.

The Dancer (DNC) is a support class. Their abilities are a mixture of healing and debuffs, but are capable of dagger-based combat on par with Thieves. They are the only healer class that does not rely on magic. Lilisette is an important NPC Dancer.

Penelo's skillset combines White Magick and Dances that inflict debuffs on enemies and enchantment buffs on her teammates.

Dancer (DNC) is a ranged physical DPS job added in the Final Fantasy XIV: Shadowbringers expansion. It makes use of various party support dances paired with throwing chakrams among other similar styled weapons.

Dancer is a female-exclusive job, unlocked by training a female unit in physical jobs. The Dancer inflicts several status changes on all enemies on the field by her dances. Dancers ideally have high Brave, because it directly affects the Dancer's abilities.

Dancer is a job class exclusive to Penelo. Her dances have debilitating effects on enemies. She can equip poles, rods, staves, and daggers.

The Dancer crown is available and its abilities involve AP gain.

This section about a job class in Final Fantasy Dimensions II is empty or needs to be expanded. You can help the Final Fantasy Wiki by expanding it.

The Dancer appears as a job card in Labyrinth mode, unlocking any non-golden doors. Also, the downloadable fourth outfit of Bartz depicts him in his Dancer job class attire.

The Dancer is a job available after obtaining a level five Thief and a level ten Red Mage. The preferred weapons for the job are daggers and fists. The job specializes in both agility and intelligence abilities. This job is involved in the requirements to unlock the Black Belt and Ninja jobs.

These wild and free souls are ever seeking limber partners with whom to dance and gyrate.

The Dancer is a character available to the party, she uses the Blade Dance ability during battle. It unlocks at level 65.

Dancer is an available job for Chocobo.

The Dancer appears on a gold card.

As a crossover collaboration with Final Fantasy Airborne Brigade, the character Manuela Hidalgo is depicted a Dancer. This is likely in correlation with the aspects of the Songstress job, where she is a proficient singer, and how the use of her volatile blood saw her gracefully splash it around onto her opponents.

In Kingdom Hearts Union χ[Cross], players can have their female avatar dress like the Dancer from Final Fantasy Record Keeper.

The Dancer from Final Fantasy XI. 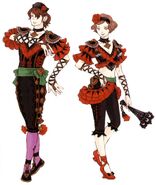 Artwork of a Dancer from Final Fantasy XI.

Artwork of a Dancer from Final Fantasy XI.

Yuna as a Songstress in Final Fantasy X-2.

The Dancer from Final Fantasy Tactics.

Jusqua as a Dancer in The 4 Heroes of Light.

Dancer as a job in Final Fantasy Dimensions. 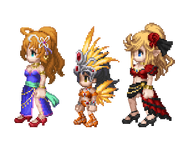 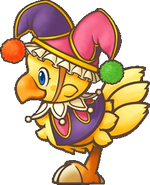