The Dancer is a job in Final Fantasy XIV, introduced in the Shadowbringers expansion. It has no base class, starting at Level 60 and can be unlocked by completing the quest "Shall We Dance", offered by an Eager Lominsan in Limsa Lominsa's Lower Decks (X: 9.8, Y: 12.0).

From the Near Eastern nation of Thavnair comes a troupe of bewitchingly graceful performers. Though certainly elegant and beautiful, their movements also speak of martial discipline─of a pulsing, persistent energy whose rhythm can inspire souls and soothe troubled hearts. Inured to the hardships of the road, these dancers have learned to land throwing weapons with the same exacting precision as their footfalls, removing any who would obstruct the endless beat of the dance.

Dancers are a ranged DPS class, wielded bladed chakrams that they toss at their opponents. A Dancer's power shines in their use of their various dances, greatly enhancing their speed and power when performed correctly in sequential order. Starting at Level 60, Dancers can use Closed Position to share their various buffs with another party member that they can choose as their "Dance Partner". As caveat to those, Dancers tend to have the lowest damage amongst their DPS peers.

The Warrior of Light hears that a performance by the famous Trope Falsiam is being held in Limsa Lominsa. Arriving on the stage, they witness the performance of Dancers, led by Ranaa Mhigo. After that, the leader of the Troupe, Nashmeira approaches the Warrior. She senses that the Warrior is an accomplished fighter, and explains that to be a Dancer, one needs high physical capabilities like the Warrior has. Thus, she invites the Warrior to learn the ways of Kriegstanz, an ancient dance of war. The Warrior agrees and receives the Dancer soul crystal. Nashmeira then proposes the Warrior accompany her Troupe performing in major cities of Eorzea.

Dancers wield chakrams and other throwing weapons. Their armor is primarily made up of "Aiming" gear, light armor with average defenses that they share with other ranged physical DPS classes.

The primary attribute for dancers is dexterity, which boosts their attack power, and should always be prioritized over other attributes. As a DPS discipline, they draw the most benefit from the critical hit, direct hit, skill speed, and determination secondary attributes, which all improve their damage dealing capabilities in some way.

At Level 15, Dancers have access to the Standard Step ability. When the Dancer starts a Standard Step, their weaponskills will change into corresponding Steps and two icons will appear in the Step Gauge and flash in the order from left to right in which the player must input a sequential command of dance steps to successfully execute a Double Standard Finish, dealing huge burst of AoE damage while buffing their allies. Using Technical Step learned at Level 70 expands this to four, allowing a Technical Finish to be done.

At Level 30, upon learning Fan Dance, the gauge expands to include a fan for the Fourfold Fantasy trait. The Reverse Cascade and Bladeshower weaponskills have a 50% chance of filling the gauge and grant a Fourfold Feather for use in Fan Dance abilities. At Level 76, the gauge expands upon gaining the trait Esprit, adding a gauge over the Fan gauge. When party members land weaponskills and spells after the Dancer executed Standard or Double Standard Finish, the gauge will fill up, allowing use of the Saber Dance ability.

Step actions are all Weaponskills with an instant cast and 1 second recast. 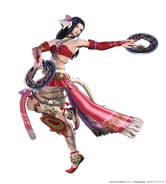