The Dancer is a job in Final Fantasy V, acquired after the Earth Crystal shatters. Though it is a physical fighter job, its limited stats and equipment selection put it behind jobs with similar roles. However, its abilities, used from its Dance command, all have very useful effects, allowing it to be powerful nonetheless.

Dances are weaker if used from the back row, meaning Dancers will have to gamble with being in the front row to do good damage with physical attacks. It is advised to keep Dancers in the back row with a magic skillset, as they can boost earth- and wind-elemental attacks with the Air Knife and Gaia Gear. If the player is bold enough to leave them in the front row, they may opt to attempt the Sword Dance strategy by equipping the Dancer with the Rainbow Dress, Red Slippers, and Lamia's Tiara.

If a character attacks using the Dancing Dagger, they will use the Dance command instead of performing a normal attack, even if their job is different.

Mastering Dancer for all four characters in the now defunct mobile and Steam versions earns the achievement "A One and a Two...".

Bartz wears an outfit suited for Latin dancing: an open red shirt, black trousers, and a bright green sash. Lenna wears a blue cocktail dress with a green sash, a pink bracelet (blue in the defunct mobile/Steam remake), and a flower in her hair.

The Dancer is one of the few jobs in which Faris looks feminine: she pins her hair up in a ponytail with earrings and wears a 70s disco outfit consisting of a pink crop-top with flared sleeves and flared trousers (bell-bottoms). Galuf wears a traditional Samba outfit like those worn by men at the various carnivals held throughout the world. Krile wears a half-shirt, a frilly mini-skirt, and a bracelet.

Dancer is the weakest melee job in terms of stats. It has the worst Stamina (meaning its HP is low), as well as low Strength and Agility (meaning its physical damage and turn rate are low). It also has a Magic penalty.

Upon mastery, Freelancers and Mimes gain the Dancer's base Strength and Agility unless they already have a higher base from another mastered job.

The Dancer has little in the way of weapon selection, as they can only equip knives, which are not powerful compared to many other melee weapons. They are one of the few jobs who can use the Man-Eater knife. Dancers also have a limited selection of armor, having light armor (magic hats, combat hats, robes, light armor, and armlets).

Dancers also have unique Dancer equipment: Man-Eater, Ribbon, Rainbow Dress, and Red Slippers. Of its equipment options, Ribbon is the most useful, granting them immunity to all negative status effects. However, Freelancers can equip this regardless. Red Slippers improve the success rate of Flirt and chances of using Sword Dance through Dance, and make the wearer immune to confuse.

Knives deal damage based on Strength and Agility, but due to a bug, Agility will only add 0 or 1 to the damage modifier. Knives only take 50% of the target's Evade into calculations. The best knife depends on preference, as the late game knives are all good with different strengths. Thief Knife, found in Phantom Village, automatically attempts to steal when attacking. Assassin Dagger is a sealed weapon and may instantly defeat enemies not immune to Instant Death. Gladius is the new ultimate knife added in the Game Boy Advance version, found in the new bonus dungeon, Sealed Temple. Chicken Knife, found in Moore, can become incredibly powerful if the player grinds its damage potential by fleeing from battles. The Dancer's Man-Eater is their best weapon to use against humanoid enemies; it gives Strength, Agility, Stamina, and Magic +2. a guaranteed chance of a critical hit against humans, and deals double damage when used with Jump.

Dance, the job's command, is a random command. It has one of the following effects:

Rainbow Dress, Red Slippers, and Lamia's Tiara make the wearer do a Sword Dance when he/she would've done a Tempting Tango, doubling Sword Dance's chance of appearing to 50%, and making Dance an even more powerful command. The random HP/MP drain can also be helpful as long as the target is not an undead, especially if the user also has a magic skillset. Sword Dance is especially powerful if Barehanded is equipped as a support ability (learned from Monk).

Dancers also learn Flirt, which attempts to inflict the charm status on an enemy. This can be fairly effective, causing enemies to lose their next turn. Flirt never works on a Heavy-type enemy, and berserk overwrites the effects of Flirt.

Mastering Dancer unlocks the ability Equip Ribbons. Though named as such, it enables the wearer to equip all of the Dancer-exclusive equipment, which includes the Man-Eater, Ribbon, Rainbow Dress, and Red Slippers.

As his downloadable costume Bartz wears his Dancer design from Final Fantasy V. Its official name is "Dancer", like the job's name.

Since Bartz has a new moveset based on the classes in Final Fantasy V, he now has a move based on the Dancer job. Dancer is an HP attack that is a mid-range combo attack with a random chance of becoming a longer combo.

When Bartz masters the job after using Dancer on opponents thrice, the attack will be executed faster and with the longer combo.

Dancer outfit appears as a Wardrobe Record for Lenna. 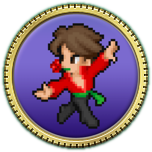