In the English localization of the 3D remake versions, Damcyan is pronounced [ˈdæm.si.ən].

Cecil Harvey, Rydia, and Tellah head to Damcyan through the underground waterway, Cecil seeking the Sand Pearl to cure Rosa in Kaipo, while Tellah is searching for his daughter Anna who eloped with Edward. They arrive in time to see Baron's Red Wings carpet bomb the castle. Most of the citizens and soldiers are killed, and Tellah finds Anna wounded. He blames the incident on Edward and attacks him, calling him "You spoony bard!".

Anna calls out to them and breaks up the fight, and she and Edward explain to Tellah they are in love, and Anna fell injured shielding Edward from attacks. She dies from her wounds, and Tellah sets off to seek Golbez, the Red Wings' captain, while Cecil, Rydia and Edward retrieve the hovercraft and continue on to the Antlion's Den to find the Sand Pearl in their nests.

A year after Zeromus was felled and peace returned to the world, Cecil, Rosa, and Cid travel to Damcyan to celebrate its reconstruction. During the celebration, Yang is alerted by a messenger of trouble on Mt. Hobs involving some monks from Fabul, and he, Cecil and Rosa set off to investigate.

When a meteor crashes near Mt. Hobs, Edward sends his secretary Harley with an escort of Guards to investigate. When Harley fails to return as quickly as expected Edward takes a trio of guards and goes to look for her. They return to Damcyan when a messenger from Baron arrives, telling Edward that Cecil wishes the meteor be handled by Baron forces. Concerned with Cecil's actions, Edward, Harley and an escort head to Baron Castle to speak to him personally.

After seeing Cecil Edward is given a gift from him and offers a gift of flowers in return. Seeing that Cecil does not recognize them as whisperweed, Edward uses them to eavesdrop on him speaking to an unknown female and realizes Cecil has given him a Carnelian Signet, which would unleash bombs to destroy Damcyan's military and leave them defenseless against Baron.

When Kain and the Red Wings invade Damcyan, Edward evacuates the castle and opens the box, unleashing the bombs spawned by the signet inside on Kain's men. Edward and Rosa, who has fled to Damcyan with Cid, attempt to defend the Crystal from Kain, but Edward is defeated and Kain seizes the Crystal and Rosa. As he leaves, Cecil and Rosa's son Ceodore arrives with a hooded man, and the two join forces with Edward and Cid to pursue Kain on the Enterprise.

The castle's third floor is a place where many events happen. During the party's first visit, Anna is found lying on the ground, and the battle between Edward and Tellah takes place. After Anna's death, Tellah swears to take revenge on Golbez, and temporarily leaves Cecil's party in a fit of rage. Edward offers them the hovercraft and joins the group. The game's first cure pots are found in the opposite corners of the room, the first being guarded by two elderly people.

The entrance can be found by walking to the right before the castle entrance, then a close straight. The room holds treasure for the player.

B1 holds even more treasure. It is accessible from a secret exit found in the previous room, which is found in the bottom-left corner.

Note: These monsters appear both around Damcyan and near the Antlion's Den.

Damcyan has an eponymous background music and leitmotif, "Castle Damcyan". 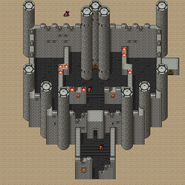 Damcyan Castle after being bombarded by the Red Wings (DS).

Map of the outers of Damcyan (DS).

Damcyan as it appears on the world map (iOS).

Damcyan on the World Map on The After Years (Wii). 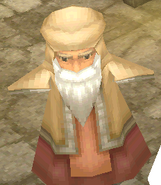