Relm: I couldn't miss the chance to practice my drawing!
This article is in need of a few pictures. Perhaps you can help by uploading a picture of FFV iOS damage floors, FFVII damage floors.

Damage floors (ダメージゆか, Damēji Yuka?) are a recurring feature in the Final Fantasy series, most prominent in early installments. They are often traps that damage the party's HP either by a minute amount each step, or by reducing them to critical HP. In most installments that they appear in, the player must pass through damage floors to progress in dungeons, though in some games, the player may press switches or use certain abilities to bypass damage floors.

The player is damaged when walking on lava in Mount Gulg, the Hellfire Chasm and the Whisperwind Cove, or on spikes in the Cavern of Ice, the Lifespring Grotto and the Whisperwind Cove. Random encounters do not occur on lava and spikes. Also, on a specific floor of the Hellfire Chasm, the player will constantly lose HP due to the surrounding heat, even while standing still; the constant damage, as well as the random encounters, will stop as long as the player remains on white tiles.

In the 3D versions, the only damage floor is in the Molten Cave, where standing in the lava will constantly damage the party. In the Famicom version, this does not happen as the lava is just water colored red.

In the Sylph Cave and the Passage of the Eidolons, the player is damaged if they step on green tiles (for the Sylph Cave) or red tiles (for the Passage of the Eidolons). These tiles also appear in the Advance port in the Lunar Ruins. If the player casts Float on the party in the menu before crossing these tiles, they can avoid taking damage. If Teleport is cast while on a damage tile in the SNES version, and the characters are not floating, up to 2,100 damage will be inflicted on the party.

Stepping on purple flowers, lava and small spikes is rendered harmless by having a Geomancer in the party (or just the Geomancer's Light Step passive ability on one party member), or by bestowing the party with Float in the menu.

The spikes in the Phoenix Cave deal 400 points of damage to the player's party every time they land on the player or the player walks on them; even petrified characters get hurt. The spikes will never KO a character, leaving them at 1 HP minimum. Damage can be avoided by stepping on the switches controlling the spikes.

In the Cave to the Sealed Gate, falling into the lava while on the moving platforms deals 8 points of damage to the party.

Only a few areas have floors or specific areas that damage the player. In the Cave of the Gi, running across the brown liquid in the third screen instead of walking will throw the player into a wall of spikes. In the Ancient Forest, stepping on a flytrap reduces the party's HP to 1. If a party member is at 0 HP when this happens, they will be revived with 1 HP.

Jessie Rasberry warns the player of the red laser beam traps in Mako Reactor 1 during Chapter 1; walking into the beams when they are active deals damage. Similarly, walking into the hail of bullets in the Collapsed Sector 7 Plate in Chapter 15 damages the party, who must take cover behind debris and navigate their way around.

The only hazards for on-foot travel are stationary traps, but the Firemane fought in the Garamsythe Waterway continually loses HP when it is standing in water, as if afflicted with Sap. This does not affect player characters.

Traps damage the players that step on them. There are various kinds of traps, some of which even heal the party, but most of the time, traps deal damage and/or negative status effects to anyone in range of a party member who triggers one. The player can cast Float to avoid traps, or wear Steel Poleyns / Winged Boots. Traps become visible with the Libra status.

The Disc of Cauthess in Duscae and the Rock of Ravatogh volcano in Cleigne feature burning ground that damages the party members who step on them. Daurell Caverns have poisonous pools that similarly damage those who walk upon them. Zegnautus Keep floods some of its hallways with poison gas, periodically dealing damage and inflicting Poison when walking through them.

The player will find the first damage floor in Kett, Glaive's Airship, Glaive Castle, Davias' Mansion, Cave of Ruins, Dime Tower, and Temple of Mana. These spikes will be sticking out of the floor. Stepping on them deals a good portion of damage to Sumo. There is also lava found within the Undersea Volcano. A third one, an energy field deals the most damage out of all damage floors. This one appears within Glaive's Airship, Glaive Castle, Cave of Ruins, and Dime Tower.

The player will come across lava right at the entrance to the Undersea Volcano on the overworld map, as well on the inside. The party will take 1 points of damage for every step they take on the lava. Inside the volcano, it is filled with lava as well.

There are two forms of damaging floors in the game, the first the player encounters is in the form of lava in both the Crevasse and Mt. Goht. The second is in the form of electricity in Xagor's Castle. If the player walks into these two specific floors, the party will take 2 points of damage for every step they take on these floors.

When inside the Cetus, walking into the puddles of stomach acid damages the party. In Mount Gulg, the player will have their HP damaged when walking on lava.

The Pandaemonium (Ω) stage has floors that change in color from gray to red and black. Red and black floors will shoot out spikes that can damage opponents on or just above the floor, adding the Brave stolen to the stage's Brave pool. 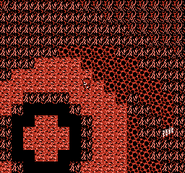 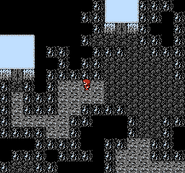 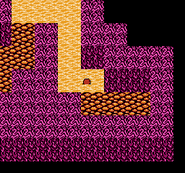 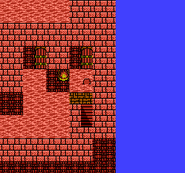 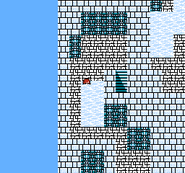 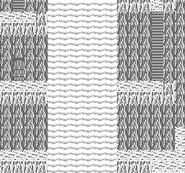 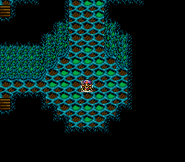 Acid in the Sylph Cave in Final Fantasy IV (SNES). 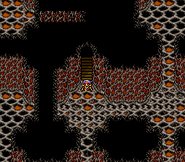 Acid in the Sylph Cave in Final Fantasy IV (GBA).

Acid in the Sylph Cave in Final Fantasy IV (DS).

Acid in the Sylph Cave in Final Fantasy IV (PSP). 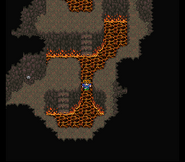 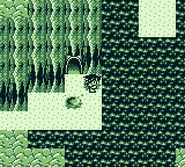 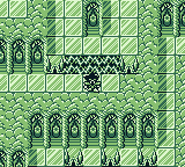