Cloud: I couldn't finish 'em. Looks like this's gonna get complicated.
The following tables are incomplete and require the The Yoma (Original) treasure chest #39 entries to be filled. If you wish, please examine the table and add anything missing. Remove this notice upon completion.

Cid Pollendina: Oh, shut up and help me remodel the Dalmasca Estersand (Final Fantasy XII) page!
Please expand this article into a full one. The following tasks need to be completed:

The Estersand, by the look of it. Let's back to Rabanastre before we shrivel up.

Vaan accepts the hunt for Rogue Tomato and after defeating it, grabs the nearby Galbana Lilies and returns to Rabanastre. Later, the party crosses the desert after escaping Barheim Passage to return to Rabanastre and again on their way to Mosphoran Highwaste.

One of the large desert regions of Dalmasca, located to the east of Rabanastre. Rife with all manner of monstrous beasts, it regularly plays host to hunts organized within the city. What settlements there are line the banks of the River Nebra, a vibrant blue vein running through the heart of the sands, wherein can be found ferries for the conveyance of travelers and goods across her flow. Many merchants make a good point of stopping in the villages to trade on their way to and from Rabanastre.

The Dalmasca Estersand is located just to the east of Rabanastre, in the Dalmasca region. Unlike the Dalmasca Westersand, the area mostly consists of wide open desert. Nalbina Fortress and the entrance to the Barheim Passage lie at the east of the desert, and the Mosphoran Highwaste up north.

The Stepping (to Rabanastre)

Just a little further east of Rabanastre is the Outpost, a stop-off for people traveling through the desert. Lately, a Flowering Cactoid has been tormenting people at the Outpost and a Hunt is available early on for it.

Depending on where the player is in the story, different people can be found trekking through the Outpost:

A village on the banks of the River Nebra. Crossing the river is possible by ferry. After the Flowering Cactoid hunt the village men are kidnapped by Cactites but are rescued by Vaan when he finds the Cactites' missing family member.

The Barheim Key, allowing entry back into the Barheim Passage, can be received after an errand-running sidequest to restore a traveler to health. Other than fishing, there is not much else to do at the village.

Because the Estersand is of sand terrain, all Earth attacks are always 20% more effective than they would be on other terrains.

In the original version, the treasures on Dalmasca Estersand are mainly common healing items, such as Potions, Hi-Potions, Eye Drops and Antidotes. In the first area since leaving Rabanastre, The Stepping, the player can find the shield Escutcheon from the top western corner in a treasure that spawns 70% of the time, has 60% chance of containing gil, but when it contains an item, half the time will yield the Escutcheon. In the Sand-swept Naze area, there is a treasure in the northern edge of the area with 75% spawn rate with 30% chance to contain Rod. Rod is a good weapon with Attack Power of 30 as it can be obtained early, as soon as the player can leave Rabanastre.

The treasures contain either Knot of Rust or Ether/Hi-Ether/Elixir/Hastega Mote if Diamond Armlet is equipped.

In the Zodiac versions, the treasures have all been changed. The treasures are now commonly meteorites and knots of rust, both good attack items to have. The player can collect the Firefly from here as soon as the game start for a challenge run, if they so wish, and also get the spells Silence and Poison. The treasures in The Yoma and in Broken Sands have various equipment pieces, so these areas are worth scouring early on, though the spoils may not be useful depending on what License Boards the player chooses.

Rogue Tomato is a hunt mark found on the Estersand after being petitioned by Tomaj in Rabanastre's Sandsea tavern. It is the first hunt, and felling it allows Vaan to join Clan Centurio. The player will also receive a handful of Galbana Lilies after a short cutscene following the battle.

The Flowering Cactoid hunt can be undertaken as soon as the player has vanquished Thextera. The hunt is petitioned by a man named Dantro in the Estersand. The mark itself is found in the Yardang Labyrinth area. The player will also receive a Cactus Flower after the battle, which can be given to Dantro's wife as part of the "patient in the desert" sidequest (see below).

The Greeden appears in the Banks of the Nebra area. It sometimes comes with Protect or Shell, and is aggressive and will attack when approached. The player must wait for the Greeden to spawn for three minutes without leaving the area. The party can kill enemies, but avoid attacking or provoking any Cactites or Cactoids. The Greeden will spawn at the spot between the two Ichthons.

At least one Cockatrice must be killed for the Nekhbet to spawn (20% chance). Nekhbet may spawn in one of three locations in the Sand-swept Naze: the westernmost point, the central area, or the eastern area close to the Murmuring Defile section on the world map.

The Ripe Rampager spawns in the Yardang Labyrinth. The player must defeat all Cactites in the area and look in the southwestern cul-de-sac just right of the exit to the Outpost. The player should fight the Cactite in the southwest, near the Outpost, first, then move toward the inner passageways of the Yardang Labyrinth and defeat the two Cactoids that appear only when approached. If the player has moved far enough from the first Cactite's location, it should respawn along with Ripe Rampager.

Each Cactite/Cactoid killed has a 33% chance of spawning the Ripe Rampager. An easy way to trigger it is to save at the nearby Nalbina Fortress, kill all three in Yardang Labyrinth and reset if the Rampager fails to spawn.

To find the Terror Tyrant the player must have spoken to the Huntmaster in Phon Coast and defeated Thalassinon, which will trigger the start of the Rare Game quest. Terror Tyrant appears in the Broken Sands with a 40% chance of it replacing the Wild Saurian.

Patient in the desert / cactite family[]

To obtain the Barheim Key, the player must finish the Flowering Cactoid and Nidhogg hunts, as well as earning their rewards, before speaking to Dantro at the Outpost to start the quest.

Next Dantro's Wife needs phials of Nebralim and requests Vaan take some from Dantro at the Outpost. Dantro tells Vaan to help himself and there are phials hidden in the boxes. There are two phials and both are needed; talking to Dantro's Wife after obtaining just one phial prevents the player from receiving the Golden Amulet as a quest reward.

The next item Dantro's Wife will need are drops of Valeblossom Dew; three can be acquired from the flowering trees in the Broken Sands on the north bank.

If the player has completed the events at the Tomb of Raithwall, Tchigri wants to ride the ferry to the North Bank Village and Vaan accompanies him. After talking to Ruksel the player is transported back to the South Bank Village, and after talking to Dantro's Wife again, she will conclude the cactoid hunted earlier was the one Vaan is now searching for.

She will tell Vaan she deposited the flower and visiting the site behind the house reveals the cactoid has grown back. Talking to Tchigri lets Vaan ride to North Bank Village and Vaan will obtain 1,000 gil and the Wyrmfire Shot.

After all the items have been collected, Dantro's Wife will ask Vaan for a Great Serpentskin (the reward from the Nidhogg). Vaan can speak to her a final time and find the recovering traveler behind her house after reentering the area, who rewards Vaan with the Barheim Key and one other gift.

The best items to give are:

After the events at the Draklor Laboratory and as part of the "great cockatrice escape sidequest", at the South Bank a cockatrice named Sassan has been pining to see his friend Torrie on the North Bank. The cockatrice is frightened of the wolf, Nathyl. The player must speak to Tchigiri to have him cross the river and bring another passenger with them.

At each crossing of the river, the player is offered to bring one of the three—Sassan the cockatrice, Nathyl the wolf or Arryl a village boy—that remain/have been brought to that side, or choosing to bring "no one". Keeping Nathyl away from Sassan by bringing Nathyl to the North Bank, leaving him there, bringing Arryl to play with him on the shore, and lastly bringing Sassan, triggers a scene where the cockatrice is reunited with his friend and sent back to his home in the Giza Plains. The reward is a Koga Blade.

The player can fish in the river after finding a fishing rod.

The merchant is located on the South Bank part of the village. The items available for purchase change throughout the game. These items may not all be available at the same time.

The map can be bought from the Cartographer's Guild moogle in Rabanastre Southern Plaza or in the Estersand South Bank Village or North Bank Village for 50 gil. 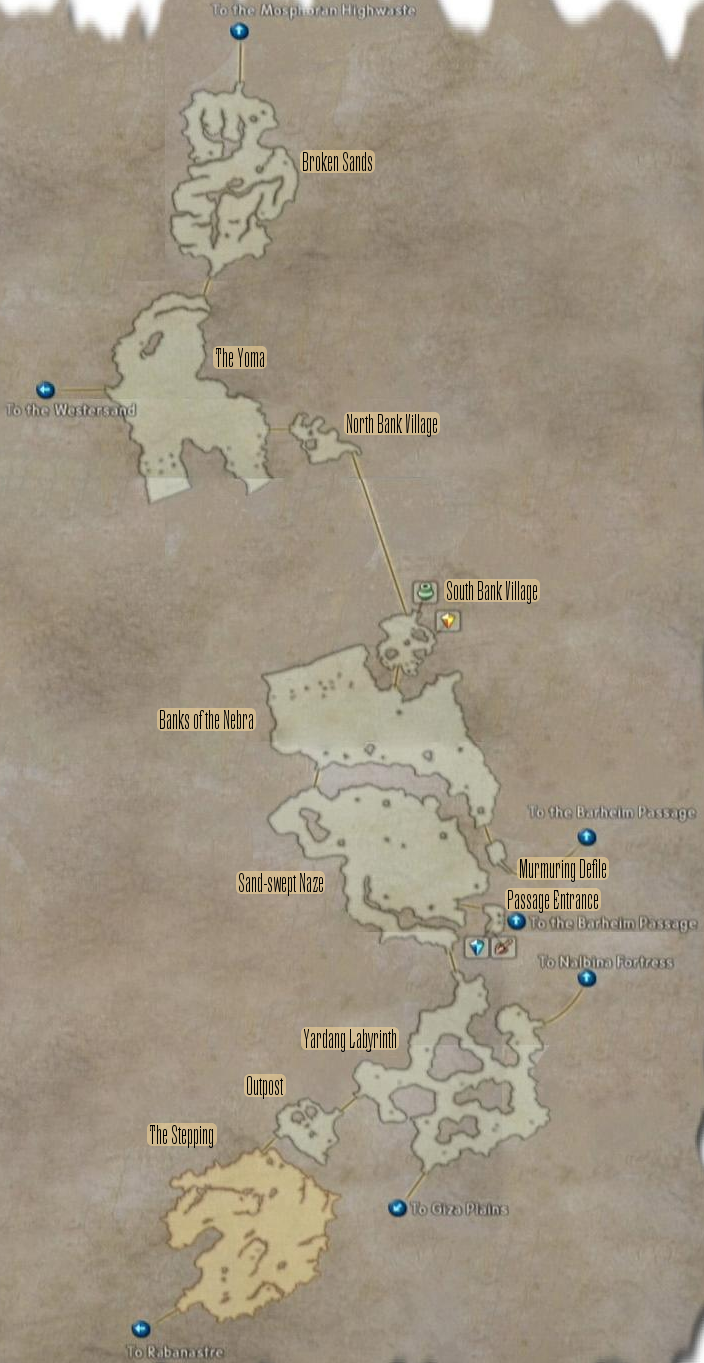 The track playing as the background music in the Dalmasca Estersand is the eponymous "The Dalmasca Estersand". A piano arrangement is included on the Piano Collections: Final Fantasy XII album and an arranged version on the Final Fantasy Orchestra Album. An orchestrated version is included on the Distant Worlds IV: more music from FINAL FANTASY album as the third track, performed by Distant Worlds Philharmonic Orchestra and Chorus.

Desert lying to the east of the Royal City of Rabanastre. Numerous trade routes cross the desert sands, but recent Yarhi attacks have made commerce with other outlying regions all but impossible.

The Dalmasca Estersand is a location from mainland Ivalice. It is revisited by the party, as Ashe asks them to help out with the attacks of Sky Pirates and Yarhi occurring on Ivalice.

The party returns to Ivalice at the behest of Ashe and Basch. Once there, they meet an unexpected ally.

This is a Soul Crystal battle. Because of the wide expanse of the battlefield, the player should be alert for enemies sneaking around the parameters of the map and heading for the player's Crystal. 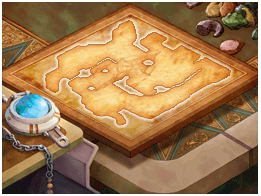 Aegyl seeking revenge on Ivalice gather in the Dalmasca Estersand with their eyes on Rabanastre. They must be stopped before their tide of blood washes over the city!

The player must seal every enemy Summoning Gate to win.

I've received reports that a material of great value has been uncovered in the Dalmasca Estersand. Time spent recovering it would no doubt be time well spent.

The player must reach and open the treasure chest containing the Forbidden Grimoire to complete this mission. 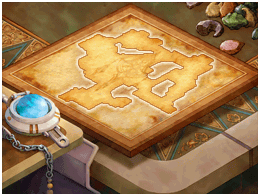 The Dalmasca Estersand appears as the Field Music Sequence for its eponymous theme.

Desert wayfarers at the outpost.