(Dali, ダリの村?, lit. Dari no Mura) is a small village on the Mist Continent, in the world of Gaia in Final Fantasy IX. It is located in the territory of Alexandria, near South Gate and above the Mist.

Dali was primarily a farming community, but after Queen Brahne decided to begin manufacturing black mages, the villagers all but abandoned farming in favor of the more profitable black mage production. The children and elders are responsible for running the town and keeping the secret.

Zidane, Steiner, Garnet, and Vivi arrive in Dali in order to rest and find a way to travel to Lindblum. They stay the night at the inn, but the innkeeper notices Vivi, and how he is similar in appearance to the black mages being produced. The next day, Garnet and Vivi explore the town, and Steiner tries to find a way to get back to Alexandria. Garnet tries to blend in with the villagers as "Dagger", a common girl, while Vivi becomes fascinated with the Windmill. Zidane talks to both of them, and eventually returns to the inn. When Vivi does not return, Zidane and Garnet go out to look for him. They hear him crying, and find a secret entrance to a base below the windmill. Garnet notices a symbol, which she saw in the castle in Alexandria on a crate, and is immediately suspicious. They find Vivi kidnapped and rescue him and discover machines producing black mages, distressing Vivi. Zidane, Vivi and Garnet sneak into a crate so they wouldn't be seen and are almost accidentally loaded onto the cargo ship. Steiner scares off the villagers and halts them from loading the ship. The four of them are attacked by Black Waltz No. 2 and after defeating him, the group decides to board the airship, Steiner hoping to return to Alexandria while Zidane plans to divert the airship to Lindblum.

Later in the game, the player can choose to return to Dali and find the people working in the farms again.

Many of the treasures are not accessible during the first visit to Dali.

It is possible to return to Dali during the party's trips to Treno with Zidane and Vivi. The Mayor's Key can only be attained on the third disc; to get the Mayor's Key the player must enter his house and check the desk three times. On the third time his son will say "ZZZ". On this opportunity the player can check the heater to receive the Mayor's Key. Once Zidane starts playing in the tournament in Treno this key is no longer accessible.

Interestingly, if the player enters the Key Items menu and selects the Mayor's Key, the information that appears alludes to the cat in the Inn knowing where the key was. This is emphasised in the fact that if the player watched the 'Cat's Eye' ATEs during the first visit to Dali, the cat sits on the heater and the desk. 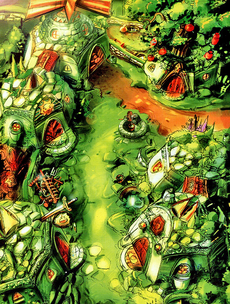 Template:Listen The music that plays in Dali is called 辺境の村 ダリ (Henkyō no Mura Dari) "Frontier Village Dali." A piano arrangement of the theme is found on the Piano Collections: Final Fantasy IX album.

黄昏の彼方に (Tasogare no Kanata ni) "Beyond the Twilight" plays in Dali's underground factory.