The impact of the red moon would destroy the primals in an instant. Little wonder that His Radiance embraced the scheme. But Dalamud is no mere rock, despite what van Darnus would have us believe. It is a great red sin, exiled to the skies by ancient Allag. There it has long festered, becoming something far more vile than we ever supposed. I see proof of this in van Darnus. His manner is...altered. He is anxious. Uneasy. He deceives His Radiance.

Dalamud (ダラガブ, Daragabu?) was the smaller of two moons orbiting the planet in the original Final Fantasy XIV. Originally, the moon was colored white, but during "Seventh Umbral Era" story, its color changed to red and citizens of Eorzea could witness it growing larger by the day.

This change was said to be affecting sea currents, crops, and even the behavior of monsters and their size, as well as a shift in the flow of aether. It was the most prominent figure in the Seventh Umbral Era story arc. Main antagonist Nael van Darnus sought to use it as part of her plan to destroy and purify Eorzea.

Dalamud was constructed by the Allagan Empire ages ago under orders from its resurrected emperor Xande for the purpose of collecting solar energy and channeling it to the Crystal Tower—ostensibly to further power the Allagan civilization in general, but in actuality its purpose was to assist Xande in opening a portal to the World of Darkness. Dalamud also served as a prison for the Elder Primal Bahamut, who served as the catalyst for the solar energy collection mechanism. However, due to a miscalculation, Dalamud caused a power surge resulting in the catastrophic earthquake which marked the Fourth Umbral Era and ended the Allagan civilization.

In the eras that followed, Dalamud would remain dormant in the heavens with its true origin and function forgotten with time, but sufficiently well-engineered enough to remain functional while dormant and to keep Bahamut trapped with it in seeming perpetuity.

Due to this noticeable change on the moon, as well as the prophecies regarding the Seventh Umbral Era, Cid nan Garlond believed the Garlean Empire was using its magitek technology and forbidden arts to use Dalamud as a Meteor of sorts to purge Eorzea of its "taint". This is later confirmed to be the doing of Nael van Darnus, with Gaius van Baelsar hesitant to follow the idea as the Garleans had not discovered how to control where Dalamud will fall if the spell was used. Later events confirmed that Nael had succeeded in initiating Dalamud's fall to Hydaelyn by a Lunar Transmitter within the Garlean stronghold Castrum Novum which has locked Dalamud's descent over Mor Dhona. Though the adventurers from the now-allied Grand Companies were able to destroy the transmitter, Nael no longer needed it as she is then infused with Dalamud's power while using Allagan technology to control Dalamud with "Lunar Fragments".

In response, the Eorzean Alliance sent a party to meet Nael at her floating platform, "Rivenroad". Here she explained her plan to use Dalamud to purge Eorzea entirely, beyond and in spite of Garlemald's desire to conquer a viable land. After her apparent defeat, Dalamud empowered her once more, transforming into Nael deus Darnus. This was not enough, as Nael was destroyed by the Eorzean forces, but Dalamud continued to descend. At first it caused luminous auroras and shooting stars throughout the skies, but as it breaches the atmosphere all other weather disappeared. Day and night were only barely distinguishable beyond the gray clouds and the burning red form of Dalamud, later accompanied by flashes of lightning.

Eventually, the Seventh Umbral Era occurs when the bulk of the Eorzean Alliance engages the VIIth Imperial Legion in a final battle to expel them from Mor Dhona and secure suitable grounds for the summoning ritual to stop Dalamud's descent. But the plan fails with Dalamud breaking apart upon entering Eorzea's atmosphere with Bahamut freed and Eorzea's landscape altered in the Calamity that followed. In the aftermath, several large fragments of Dalamud have remained scattered across the realm. Notable sites include the Agelyss Wise in Eastern La Noscea, the Burning Wall in Eastern Thanalan, Finder's Bluff in North Shroud, the Nail in Coerthas Central Highlands, and the Singing Shards in Mor Dhona. To study these lunar derelicts, Gaius van Baelsar had Castrum Occidens constructed in Eastern La Noscea to investigate a large cavern containing Dalamud's surviving components.

The Lambs of Dalamud are a cult that sprang up when Dalamud first began showing signs of its descent. They believe that the scent of fresh blood will attract "Menphina's Loyal Hound" and bring it down upon the land to purify it. For this reason they have sent followers to the city-states of Eorzea to lure adventurers to their dooms under the pretense of having them save kidnapped family members.

Though some of its members are known to use swords, the Lambs are predominately Thaumaturges who use the blood of their sacrifices to generate their spells.

The Lambs of Dalamud do not fear death, believing that Dalamud will recognize their sacrifice and descend into the Gates of the Seventh Hell to resurrect them as servants in the Seventh Umbral Era. Their last known ritual was practiced in Gwyr-Aen, coincidentally where the symbol of Menphina appeared, before an adventurer slew them. They accepted their deaths readily upon realizing that they gave their own blood in service to Dalamud.

Despite the passing of the Calamity, the Lambs of Dalamud did not disband, instead remaining in denial and continued rituals within places like Tam-Tara Deepcroft and Amdapor Keep.

The Dalamiq is a Xaela tribe from the Azim Steppe, which live in a small village on an islet in the middle of a two-malm-wide span of the great inner river, are also known to worship Dalamud.

Dalamud was intended to have a different role on the game's original storyline and content plan, likely as the focus of a content patch or entire game expansion. However, once Naoki Yoshida decided they would close the original version with an "end of the world" scenario, he asked if it was okay to "bring it down".

A consistent part of each update involved making Dalamud appear closer in the sky. In 1.19 and 1.20 the change could easily be overlooked, but thereafter it grew to a size that was impossible to miss when the skies were clear, larger even than the sun. It appeared deep red against the blue of day or black of night—it orbits in sync with the planet's rotation. It was locked in its descent on Eorzea. The closer Dalamud got, the more its artificial nature became apparent. By 1.23 and the "End of an Era" trailer, its mechanical nature was entirely evident. Nevertheless, the "Lunar Fragments" with which it showered the planet, seemed to be chunks of burning rock.

Dalamud was always in the southeastern sky during its descent, no matter what part of the continent the player viewed it from. One would expect its position to have changed with perspective while it was closer to the land, but it appeared to be falling southeast of Thanalan, possibly in the Sea of Ash just south of Ul'dah. During the "End of an Era" video its true position is over Mor Dhona.

In the original version of the game, Dalamud's fall had a unique weather. However, in A Realm Reborn the icon for this is not shown inside instances with Dalamud on them such as The Second Coil of Bahamut - Turn 4 or The Calamity Retold.

In patch 3.5 for Final Fantasy XIV: Heavensward: "The Far Edge of Fate," Papalymo is forced to create a cocoon of light to prevent Shinryu's rampage. The cocoon of light is similar to Dalamud in appearance, but white and with crystal pillars.

The Astrolabe, a staff made only by the most skilled Goldsmiths and restricted for use by Level 50 Thaumaturges, is a celestial model depicting the planet with moons Menphina and a tiny red Dalamud orbiting. In this model, the two moons swing around Hydaelyn via magic. The model's moons act independently of each other, even though before 1.19 Dalamud appeared leashed by Menphina's gravity as a static part of her being. Dalamud is depicted in the symbol for Menphina as the smaller circle overlapped by the larger Moon circle.

Dalamud was referred to as "Menphina's Loyal Hound" by NPCs due to its relationship with the larger primary moon. In later patch cycles, citizens began giving it less kind titles (such as "Menphina's damned mutt") because of the environmental issues Dalamud's proximity was causing.

In the Alexander storyline, Dayan mentions to have seen an alternate reality in which the mechanical Primal woke up prior the Seventh Umbral Era and stopped Dalamud from falling, preventing the Calamity. However, just like any other timeline in which Alexander awakens, it would have drained the aether of the entire planet. 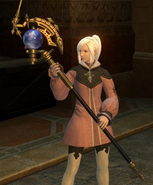 An Astrolabe held by a female Midlander.

Dalamud over Mor Dhona after patch 1.23b. 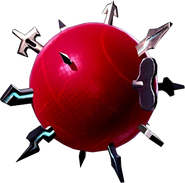 Dalamud in Cid's memories of Bozja.

"Dalamud" and "Bahamut" being phonetically similar may be on purpose, because Dalamud served as Bahamut's container.

"Dalamud" is one of the most blatant name-changes between the Japanese and English versions. In the Japanese script, the moon is referred to as "ダラガブ"; most literally transliterated as "Daragabu", and more conventionally as "Dalagab". There is no way to get a "-mud" sound from "ガブ"; this represents a conscious decision to change the name. The lyrics to "Rise of the White Raven" are consistent across all language options—the lyrics state "Testate adventu Dalamud" at the end of the chorus, with no room for interpreting the final syllable as "gab".