Daisy (デイジー, [missing rōmaji]?) is one of Fina’s companions in season 3 of Final Fantasy Brave Exvius. She appeared in Wohlstok and joined Fina and Bruce to return the people’s emotions. Later, she stayed with Fina to help save the other worlds in the Farplane Express. She is a stage actress.

Daisy is a young lady with fair skin, blue eyes and a long blonde ponytail tied on the left side of her hair with a red ribbon. She wears small black hat with a white daisy as well as a red hair clip. She wears a dark red tube top with a white dark-collared vest and a yellow gem on her chest. She wears an armlet on her right arm with white gauntlets with a yellow orb and red shorts with a white and yellow skirt with a bow around her hips. She has dark stockings and white shoes.

Daisy is upbeat and emotional. She is a caring person with a deep passion for acting. She puts her entire emotion into her theatrics, as she is a very expressive person who often wears her heart on her sleeve, sometimes much to her embarrassment which she tries to hide by tickling others.

Daisy is a glutton with a sweet tooth and always makes a point to indulge herself in pastries whenever possible. Although brave and courageous in battle, she fears ghosts, which affects her strongly. 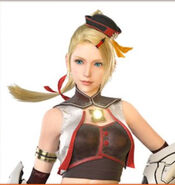 Daisy is voiced by Yoshino Aoyama in her CG Limit Burst animation.

Like most of Fina's season three companions, Daisy is named after flowers.