Daigoro (ダイゴロウ, Daigorō?) is Yojimbo's faithful canine companion, always appearing at the aeon's side. Daigoro is actually the manifestation of a fayth that was made of a dog that accompanied Yojimbo's fayth.

Yojimbo often performs attacks himself, but at times he refrains from attacking and his dog attacks for him. As such, Daigoro is a recurring ability originally from Final Fantasy X, appearing both as an enemy ability when fighting against Yojimbo, and as a summon ability when summoning. Daigoro's attack deals non-elemental damage.

The summon ability can be used by Yojimbo after Yuna has summoned him into battle. It deals moderate damage, but its Yojimbo's weakest move. When used, Yojimbo will shake his head before using Daigoro, as if to disapprove of the amount of money the party gave him. He can't use this on long range targets, however.

As an enemy ability, it deals physical damage, and its use is determined in different ways. Yojimbo will use the ability when fought in the Cavern of the Stolen Fayth, and will use Daigoro randomly with a power of 20, which can deal critical damage. When Dark Yojimbo uses the ability, it has a power of 8, but can inflict Poison and Petrify for an infinite time.

Daigoro appears as an enemy ability, as Yojimbo can be fought as a boss, but does not appear as a summon ability. The ability deals non-elemental damage, similar to the summon ability from the predecessor.

Yuna's dog, Kogoro, that appears with her Trainer dressphere is based on Daigoro, and although the dog attacks similarly it is not the same ability as Yojimbo's.

Daigoro appears in Kugane Castle. After requesting payment to slay the Warrior of Light from Kageyama, Yojimbo calls upon Daigoro to collect the piles of gold thrown into the area. As Daigoro leaps around picking up the money, he knocks back players in his way.

During the Even Further Hildibrand Adventures quests, Daigoro's training to pick up money is used against him by the Kugane Wolf Burglar. The burglar tosses a gold coin far into the distance, causing Daigoro to chase after it. Later, when Yojimbo turns against the inspector's group, Daigoro is able to determine that Hildibrand's family possesses a large fortune and sides with him until the bumbling Hildibrand accidentally steps on his tail during a "furious belly rub". After Yojimbo is revealed to be Gilgamesh in disguise, he reveals that he initially found Daigoro starving during his journey to Kugane and took the dog in as a replacement for the chicken Enkidu, whom Gilgamesh allegedly had been forced to kill and eat to stave off starvation himself.

Daigoro also appears during The Slice is Right GATE in the Manderville Gold Saucer. As part of a shell game, Yojimbo hides Daigoro beneath a large basket, along with a basket containing a pile of Gold Saucer Points, and a basket containing nothing. Players who select Daigoro's basket are knocked off the stage and lose the game. 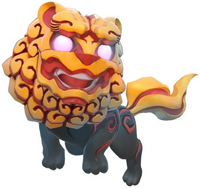 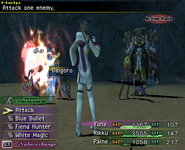 [view · edit · purge]Dai means "great," and goro means "fifth son" in Japanese. It is likely a reference to the manga and film series Lone Wolf and Cub, which tells the story of ronin Itto Ogami and his young son Daigoro traveling the Edo era countryside of Japan as assassins for hire.