Boss
Dahaka is a Gran Pulse fal'Cie who appears in Final Fantasy XIII. It is tasked with searching for Etro's gate from the sky, and it is sighted by Lightning and her allies in Yaschas Massif, where they resolve to follow the fal'Cie to Oerba.

Territorial in nature, Dahaka attacks anything that invades its abode in Taejin's Tower. It attacks Lightning and the other l'Cie atop the tower after its tail is removed by the Menhirrim.

Residing within Taejin's Tower, this Gran Pulse fal'Cie soars through the sky with an ease that seems almost uncanny given the bulk of its form.

Although the majority of fal'Cie on Gran Pulse dedicate themselves to terraforming or other tasks of environmental modification, Dahaka does nothing of the sort. Plausible conjectures as the nature of the flying fal'Cie’s duty include some manner of aerial monitoring or the search for something the heavens conceal.

Dahaka is fought atop Taejin's Tower. "Test of the l'Cie" serves as battle music during the boss fight against it. 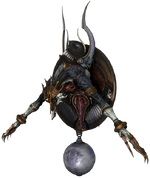 Dahaka shares its Japanese name with Taharka, a boss from Final Fantasy IX.