Cid Pollendina: Oh, shut up and help me remodel the Daguerreo page!
Please expand this article into a full one. The following tasks need to be completed:

There's an old legend in this region about a dragon god and his divine protection. I think it may be true.

Daguerreo is an optional location in Final Fantasy IX. It is located on an island near the Forgotten Continent, and can only be reached by airship or Choco. A library of sorts, its origins are mysterious and unexplained. Its denizens come from all over the world, ranging from scholars to refugees.

Some of the best weapons and armor in the game can be bought or synthesized here. This may reflect the location's vast collection of esoteric knowledge. Despite its many tomes, Daguerreo's lower levels are flooded.

The player can find the Engineer Zebolt from Lindblum near the right entrance on the second floor.

Zidane will also encounter a Cleyran survivor, Forest Oracle Kildea. Gilgamesh also resides in Daguerreo, although he will not reveal his name until certain criteria are met.

The Capricorn Stellazzio coin is found on the right of the entrance in Daguerreo.

On the third floor's balcony, there is a stone that affects the altar at the entrance: after activating it, the statue in the first floor allows the player to turn Ore into Aquamarine, one for every four Ores.

To open the weapon shop the player must fix the lift to the library's upper levels. Below the Weaponsmith there are three levers and three platforms. To the right there is a staff leaning against the bookshelves.

The master treasure hunter, the Four-Armed Man, can be met in Daguerreo. If the player attains the highest Treasure Hunter Rank he is revealed to be Gilgamesh. If the player challenges him to a game of Tetra Master they find he plays with the rare airship cards, and extremely rarely even with the Invincible card, one of the game's most powerful cards. After he's revealed his identity as Gilgamesh he leaves and can no longer be challenged for a game of cards.

The Old Man near the inn on the top floor mentions an item called Magical Fingertip, which the player can then win at the Treno Auction House (after buying and selling four other auction key items to the citizens of Tremno) and bring to him in exchange for Excalibur, one of Steiner's best weapons.

A Researcher in the middle level allows the player to rename any of the characters when the player shows him the Namingway card. The ladder to the middle floor is behind the scholar searching for a book. The book is at the stack of books on the right.

After returning from Terra the party can start a quest to restore Mognet Central by talking to Kupo at Alexandria. As part of this chain of letters Mois from the Fossil Roo entrance at Mist Continent Qu's Marsh sends a letter to Noggy at Daguerreo.

Noggy in response writes to Kupo in Alexandria:

This is the final Mognet letter.

There are no enemy encounters inside Daguerreo, but the world map outside, consisting of Salvage Archipelago, Everlang Island, Lanar Island, Sacrobless Island, and Palmnell Island, has random encounters. Ragtime Mouse may additionally appear inside forests. Though the below chart lists enemies since "disc 1", in a normal playthrough the player can't access the areas until they have at least the Blue Narciss in disc 3.

The trickster Gimme Cat monster appears here, demanding a Diamond reminiscent of the monsters in the friendly monsters sidequest. The player should not appease the cat, as there is nothing to gain and Diamond is a limited quantity good. The Grand Dragons, meanwhile, can be good level grinding targets as they can be instantly defeated with Quina's LV5 Death.

The theme that plays in Daguerreo is called "Daguerreo, the Hermit's Library".

Daguerreo on the world map. 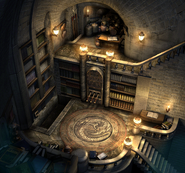 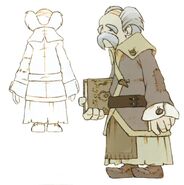 Artwork of a scholar.

Artwork of a scholar.