Daemonwall is an enemy in Final Fantasy XV fought during the A Wall in Our Way hunt in Steyliff Grove, and can also be encountered in the main quest World of Ruin tunnel along the road to Galdin Quay. The hunt shows up to the hunt list at Meldacio Hunter HQ after the player reaches Rank 8 as a hunter.

Daemonwall is based on the recurring Demon Wall enemy from the series, which debuted in Final Fantasy IV. Demon Walls appear as bosses with a gimmick, advancing on the player who must defeat it before being crushed and getting a Game Over.

A daemon inextricably bound to its home, it lashes out at interlopers from within the very foundation of its habitat. Difficult by nature to spot, there was once thought to be only one specimen in existence, yet others have been observed subsequently.

When fought as a hunt in Steyliff Grove, the daemonwall is met near the end of the dungeon in an area littered in warp pads that teleport the party outside the ruins when touched. The party finds the path blocked and the wall comes to life and begins to advance upon them. The player must defeat the daemonwall before it pushes the party onto a warp pad at the end of the hallway. If this happens, the player must return to the end of the dungeon to try again. Lesser daemons also spawn during the battle. Wait Mode is disabled.

The side rooms between the main halls can be cleared of daemons before engaging the daemonwall so the player can escape into them every time the wall pushes the party to the end of a hall. This quadruples the available time to beat it since the player can fight it through four halls. The party will not automatically use the side rooms; the player must head there when the daemonwall approaches that section of the hallway. The door in the second hall is much closer to where the wall starts, so the player must be careful to not be pushed past it.

The hunt is considered completed when the daemonwall as well as the other daemons present are killed.

In Chapter 14, the player can find a daemonwall in the tunnel on the road that leads to Galdin Quay and fight it as Noctis alone. It does not advance upon the player, and thus this battle has no time limit.

Daemonwall can poison and petrify the party. It is weak to polearms and machinery, and resists elements besides light, which it is weak to. Its arms stretch out to attack those further away from it (can be parried). It is impossible to blindside it. It throws fire balls that inflict Stone that have further range than its other attacks (can be avoided by staying near to it). It can slap the player with its tail. It breathes poisonous mist (can be avoided by staying a distance away from it). In the solo battle in the World of Ruin, it can temporarily vanish and then reappear on a different part of the tunnel.

It is not particularly strong, and the main challenge of beating it is to do it before being teleported out of the dungeon.

For the battle in Steyliff, the player should eat food that gives good buffs as the battle is on a timer. Greatly boosting attack is always good (as the daemonwall resists elemancy), and the player can pop some Power EXs and other buffer items to further boost their power. It is good to wear whatever attire that boosts Strength the most. Braveheart from Legendary Herb-Grilled Whopper gives +500 Strength at the cost of reducing magic to zero. Clairvoyant from Marrowshroom Chowder, Golden Tail Soup and Scientia-Style Sushi makes all attacks critical; the sushi is especially potent but only available in the Royal and Windows Editions. The Vortex weapons from Adventurer from Another World also make all attacks critical.

It is good to enter the battle with full Armiger bar and use it soon. Armiger is best used after using a Strength buff item. In the Royal and Windows Editions, the player may also have Armiger Unleashed available. Weapons that attack fast, like daggers, might be good if the player has a strong pair, as well as royal arms, such as the Trident of the Oracle. Repeatedly warp-striking can be good with the right Ascension abilities unlocked. Unlocking Ultimate Deathblow in the Ascension helps as well.

Prompto's Piercer can be used to debuff the daemonwall. Gladiolus's Impulse is good when other daemons spawn to dispatch groups of them quickly, as the player should keep focus on the daemonwall, but it might get chaotic in the narrow space with other enemies appearing. Magic can also be used to quickly dispose of the other daemons. If using magic, crafting spells with Quadcast or Quintcast is good. Elemancy buffed with Stop will put the daemonwall in a vulnerable state and stop its progress. Ignis's Overwhelm is good when the daemonwall is alone; the wall will not move during Technique animations.

If someone gets petrified the player can heal with Gold Needles; though in most battles healing Stone is not a priority since it expires fast, it is best to not lose time in this battle. Healing with items tends to be better than Ignis's recovery Technique so the tech bar can be used for offense. Ignis's The Good Chamberlain accessories make him automatically use healing items.

In the solo battle in Chapter 14 the player can simply stay out of the daemon's reach and use ranged weapons, such as the crossbow royal arm or firearms, and magic from elemancy and the Ring of the Lucii. The Cerberus firearm can be manually aimed and has great breaking power. The player could use Death and then switch to firearms while waiting for MP to recover (or use MP recovery items). This tactic could take a while, but the battle is not on a timer like the Steyliff hunt. The Summon prompt can appear. 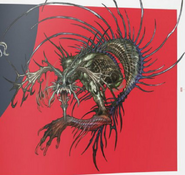 Daemonwall is named after the recurring "Demon Wall" boss in the series, but with "daemon" as this is what the nocturnal monsters born from the Starscourge are called in Final Fantasy XV. [view · edit · purge]Dæmons are benevolent spirits that exist in classical mythology. They are of the same nature as mortals and deities. In Final Fantasy XV, daemons' role in the story is more akin to demons, however. [view · edit · purge]A demon is "an evil spirit or devil, especially one thought to possess a person or act as a tormentor in hell".