Daedalus (ダイダロス, Daidarosu?), also known as Didalos and Daidalos, is a recurring enemy in the series.

Daedalus is an enemy fought at Kefka's Tower. It uses powerful spells such as Gravity, Bio, and Level 5 Death. In addition, if any character has Reflect at the start of the battle, it will start the battle by casting Reflect???. 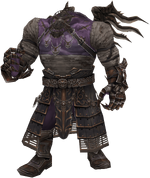 Daedalus is a boss fought at Giruvegan at the Gate of Water in order to enter Giruvegan. It starts the battle with Haste status, and attacks with moderately powerful physical attacks as well as the Darkra spell. It is one of the few enemies in the game to have Gemsteel to steal.

The dullahan Daedalus is the boss of the level 48 FATE "Rude Awakening," found in the Proud Creek area of the North Shroud. The flavor text for the FATE notes that Daedalus was a vengeful spirit once imprisoned by the elementals of the Black Shroud, but has since been freed by the damage wrought by the Calamity. In The First there once existed company named Daedalus Stoneworks which produced golem-like creatures called Talos to perform manual labor.

Daedalus is an enemy fought fought at Rela Cyel Past and later at Rela Cyel. It is the most dangerous enemy in the dungeon, but also one of the slowest thus making it easier to fight. It attacks with homing missiles, a spinning attack, and a laser.

Daedalus is an enemy fought at the Ruins and Gate. It has with a blue variation that can cast Barrier on themselves.

Daidalos is an enemy fought at the Lufenia Ruins.

[view · edit · purge]In Greek mythology, Daedalus was a skillful craftsman and artist who constructed the labyrinth of Minos which held the Minotaur imprisoned.