Lua error in package.lua at line 80: module 'Dev:Japanese' not found.

The Dad Bomb is a boss from Final Fantasy IV -Interlude-. It is fought on the summit of Mt. Hobs and attacks the party after they rescue two unconscious Monks.

Two Monks fight alongside Cecil, Rosa and Yang. After being attacked once, the Dad Bomb will swell up to a monstrous size on its next turn. During this state, it will use Blue Flame, inflicting approximately 200 points of damage to all party members. It can also attack twice in a turn.

On its fifth turn after its transformation, it will use its most powerful attack, Massive Explosion, sacrificing itself to deal approximately 400 points of damage to all party members. The Dad Bomb will then be replaced by three Gray Bombs and three Balloons.

It is recommended that all party members Defend, except for Rosa, who should concentrate on healing) as attacking the Dad Bomb is immaterial. The Monks should be placed on standby just before the Dad Bomb explodes so that they are ready to use Kick to quickly defeat the six bombs that appear later.

Lua error in package.lua at line 80: module 'Dev:Context-link' not found. The Progenitor, based on the Dad Bomb, appears as the second final boss of Pharos Sirius (Hard) after the defeat of the Progenitrix, the Final Fantasy XIV version of the Mom Bomb. 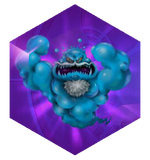 The Dad Bomb is a dark-elemental summon. The summon's special attack is I Will Explode!, which deals dark-elemental damage randomly three times. The summon costs three points to use from the consumption gauge. In addition, the summon can be upgraded into the more powerful King Bomb summon.

The Dad Bomb allows the wielder to use the following abilities:

Retrieved from "https://finalfantasy.fandom.com/wiki/Dad_Bomb_(Final_Fantasy_IV_-Interlude-)?oldid=3244231"
Community content is available under CC-BY-SA unless otherwise noted.