Guest character
Dad is a temporary party member in Final Fantasy Legend II. Dad, but referred to as Captain, is the key personnel of the Guardians. He's a professional at collecting MAGI.

Dad is a tall man with broad shoulders short, light gray hair and mustache. He wears a white shirt on top of which he sports brown leather jacket, fedora, fair pants, and black shoes. The official artwork depicts him wielding a whip.

Dad is very powerful and well known throughout most of the worlds that the heroes visit. He's a very courageous man, and looks out for the party and willingly sacrifice himself twice to save them from harm. He also takes care of Lynn and her mother while her real father is missing.

In the middle of the night, Dad tries to wake up the main character while trying to tell him/her something important. He entrusts his child with the Prism and tells him/her to care of Mom before leaving out the window.

An unspecified number of years later, Dad visited Ki in the Shrine of Isis and ask her about MAGI, then leaves shortly afterwards.

The party sees Dad once again in Lynn's house, but the main character leaves without talking to Dad, and tells his/her companions that they have to gather the remaining MAGI. In the Japanese version, the main character thinks Dad is having an affair with another woman. They leave the village to their next destination.

The party finds themselves sitting in a holding cell within the Guardian's Base after being accused of being spies. Dad has a conversation with the guard and he lets them out. The party soon find him in the lower level of the base, but they do not get a chance to talk to him. A brutal sound awakens the party from their bed as the base is under attack. The party finds Dad on the next floor and he tells the party that new gods found the base. They sent in their monsters before joining the party.

The party sees someone waiting at the Pillar of Sky, when they approach him, a Commando engages the party in battle. After being defeated, he survives long enough to deliver a message to Dad. He tells him that they got Lynn, and he should come to the next world. The party heed his message and depart.

A Ninja is holding Lynn and greets them, he tells the party that him and his daughter were waiting for them. But Lynn's says that her father is missing, so Dad said that he would be her father until her mother gets better. The monster gets angry after being fooled by them. Before harming Lynn, Dad tells the main character that he'll get the monsters while they save her. Dad gives a MAGI and tells the main character to tell his wife that he loves her before rushing towards the monsters and exploding. Dad's heroic action would go in vain, as the Ninja reappears before the party, who defeat him.

After Apollo takes the party's seventy-sixth MAGI and leaves, Dad arrives at the scene, and the main character is surprised to see him alive. He tells the party to not give up hope, telling them that they haven't found the last remaining MAGI yet. One of the traveling companions will say that it'll be the seventy-seven MAGI altogether. Dad says its not true that there are seventy-eight MAGI that makes the statue of the goddess Isis. Apollo is still missing the last MAGI, the Guardian said there were seventy-seven MAGI in all, and the last one is located in Final Dungeon. Afterwards, Dad joins the party.

The party confronts Apollo at the entrance of Central Shrine, Dad warning him to not use the MAGI. But he tells him that he already used it and they'll see what happens. The party is left with no other choice but to fight him.

During the middle of the battle after the party is unable to inflict harm to Apollo, he transforms. After a few moments of battling him, Apollo starts to melt. The main character tells him that his transformation is not perfect, he's still missing one MAGI. Apollo eventually explodes, but Dad jumps before the party and shields them from the blast which knocks him out.

The party takes back the MAGI, and with Dad dying. The party decides to use MAGI, and ignoring Dad's plea not to. They use the MAGI and a goddess appears before them. The main character ask who she is, and she replies that she's the ancient goddess Isis. Before anything can be told, Isis mentions that they do not need to tell her anything because she can read their minds. The main character ask her to heal Dad, and thanks her after she does so.

The party leaves the unconscious Dad laying on the floor and venture deeper into the Central Shrine. They meet Dad once again after defeating the security system. The main character tells Dad that s/he feels like s/he's seen more than everybody else. Dad mentions that their world isn't that small, and he'll like to go and see it all himself. The main character reminds him to go back home to his wife Jane. They return to First World together.

Dad's family makes a cameo appearance and he goes by the name Captain. They are all found within one of the houses in Donmac, and they will give key information to Arthur about the current situation. After talking to the Captain he gives Arthur the Katana tablet, an ingredient needed in the construction of the last Mystic Sword called Emperor. Afterwards, the Captain and his family mysteriously vanish from the house right before Arthur's eyes.

Dad appears in the SaGa Compilation Trading Card Game with a wind-elemental card. 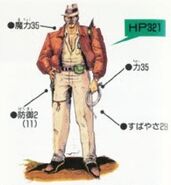 In the Japanese version, the family went searching for the Three Imperial Treasures instead of the Lost Ark. Their cameo makes more sense in the Japanese version of Final Fantasy Legend III, where the three items needed to forge the Kusanagi Sword (translated as Emperor in the North American version) are the Three Imperial Treasures (he gives the player the "Katana").