Located in the desert south of Deling City, all people deemed dangerous by the government are sent to this facility. It has become a symbol of President Deling's fascist policies.

D-District Prison is an unrevisitable location in Final Fantasy VIII.[note 1] The player can thus permanently miss certain things, like the Character Report, if they conclude the events without doing everything first.

The prison holds political prisoners of the nation of Galbadia. D-District Prison may be lowered into, or raised out of, the surrounding desert sands by controls located inside it. There are several Triple Triad players imprisoned here. The player can find an issue of the Combat King magazine in the prison's first floor.

Squall and his friends are imprisoned after their assassination attempt on Ultimecia (as Edea) in Deling City fails. Squall is being tortured by Seifer, who questions him about the true purpose of SeeD, under the orders of Ultimecia. Squall is unable to answer and passes out due to pain. A while later, he regains consciousness and is rescued by Moombas.

The rest of the party is thrown in a cell, their weapons confiscated. As Zell has no weapons to have confiscated, he escapes their cell and brings back the confiscated weapons to Quistis, Selphie, and eventually Squall.

Irvine Kinneas, on orders from General Caraway, comes to the prison to take Rinoa away, but she forces him to turn around and come back for the others. As the two return they find themselves amid a jail-break. Irvine helps the party escape by telling them the way out and holding back the guards. Reaching the top, the party is ambushed by guards which they defeat. The prison begins to submerge but the bridge closes before Squall could go through. Squall is hanging on the edge and he moves to safety before the prison sinks into the sand.

In the time compressed world, a magical barrier surrounds the prison complex.

The Galbadian D-District Prison is situated in the center of the Dingo Desert in the Galbadian Continent.

The prison comprises three immense drills in the desert, forming the spires of the prison, connected at the top by catwalks. It is a hi-tech prison using cranes to transport cells, and the interior is entirely metal.

The cell levels make up the majority of at least one of the three drilling spires that make up the prison. Some levels are devoted to general population. Cells are accessible by numerous catwalks that spiral down through the spire. Other levels are devoted to solitary cells hung together in the lower levels of the spire where the only way to access them is to use a crane to move the box-like cells to a readily accessible level.

The layout of the floors is always the same and every floor has two cells, although not both of them are visitable in every floor. A barricade may block the path, meaning the player must circumvent the floor to get to the next one.

There are various possible random encounters, including Guard, Elite Soldier, GIM47N, and GIM52A.

The cells have different contents depending on the floor as follows:

There is a shop on Floor 8 where the player can buy items.

Biggs and Wedge (in Zell's cell)

Triple Triad, Find items
General population cells are for the general criminals of Galbadia who are not regarded as a high security risk if they were to mingle with the other prisoners. As such, the cells accommodate more than one prisoner. There are up to twelve levels devoted to general population cells, each easily accessible by guards and janitors.

None
Solitary cells are reserved for the more dangerous prisoners who cannot be risked mingling with the general population. Each cell is a box hung among others in a grid within the spire. These cells can only be accessed by moving them with a crane to one of the higher levels.

Top of the prison

GIM52A x2, Elite Soldier
The top of the prison complex has a door leading to the outside catwalks, and controls for operating the claw that picks up cells from the prison. It also has the door to the interrogation room. Arriving here as Squall after Irvine has arrived to the prison marks the end of the dungeon. The player can obtain a Cottage by talking to a Moomba, who will only be there if Zell defended him against the prison guard earlier, as well as a Rename Card by talking to another Moomba, who will only be there if Squall answered "Let me die" during his interrogation.

The catwalks are the only known means of access between the three "spires" of the prison. During the drilling phase where the three spires sink into the ground, the catwalks withdraw into the spires.

Interrogation
The room is used for interrogating prisoners. Situated a level or two above the cells, one of the room's notable possessions is a wall rack that, when a prisoner is tied to it, sends currents of electricity through them as a form of torture.

During Squall's interrogation, his answer will affect the gameplay.

After escaping from the prison, the party stops amid the desert by a ruined APC where the player must assemble two parties for the next split mission the party is to take: Selphie leads her team to the Missile Base, whereas Squall takes his team to Balamb Garden. There is an Aero draw point here.

A train station, possibly used for cargo transfers, is within driving distance from the prison facility and is linked with the main rail system. Squall and two other members of his group use the station to hijack a train to return to Balamb Garden. It only appears in this scripted scene, and cannot be explored by the player.

As the Galbadian soldier runs after the player party as they hijack a train from the Dingo Desert station, the player characters make different comments on his attempt depending on who is in the party.

During Squall's interrogation, there are two choices. If Squall chooses "Let me die", there will be a group of Moombas outside the interrogation room, and either two or three floor shortcuts will be allowed to the party after being reunited with Squall (the third one will only appear if Zell stood up for the Moomba against the prison guard earlier). If Squall chooses to lie, there will be no one waiting outside the interrogation room, and the party will be allowed either only one shortcut or none at all, depending on whether Zell defended the Moomba or not.

There are three Triple Triad players in the prison. The one on floor 10 upgrades the Battle Report to Character Report, letting the player view stats on characters' individual kills and KO's. If the player missed the Battle Meter, this player cannot be challenged. The other two give prizes if the player wins.

Defeated by Edea, Squall and the others are sent to the D-District Prison. Their weapons are confiscated, but Zell, skilled in unarmed combat, engineers their escape.

One of the dummied backgrounds in the game is that of the back of the arm control room in the D-District Prison.

During the prison escape, it is explicitly mentioned (and shown) that magic does not work due to an anti-magic field. However, not long after, the party fights Biggs and Wedge, and the battle participants can cast magic without difficulty. After the battle, it is announced throughout the prison the anti-magic field is being deactivated, dispelling the possibility it had been turned off prior to the fight.

Various signs in the D-District Prison spell "Galbadia" as "Garbadia". 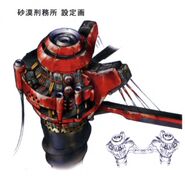 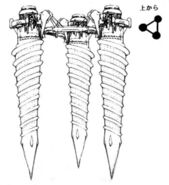 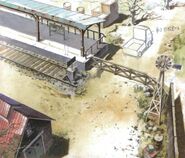 Concept sketch of the train station.

Concept sketch of the train station with a train.

Seifer takes Squall to be interrogated.

Rinoa forces Irvine to turn back to the prison.